Telefónica Black, with Spaniard Fernando Echávarri in charge, crossed the finish in Cape Town 4 November at 1643 GMT (1843 local time) to complete leg one in 24 days 04 hours 43 minutes and 15 seconds (24:04:42:14).  This is the last boat to finish leg one of the Volvo Ocean Race and the team earns one point, bringing their total to seven points and putting them in fifth place overall.

Skipper Fernando Echávarri said, "It's really good to be here.  There has not been much wind during the last week and it has not been possible to even change position or gain anything.  The boat is not in a good state and it was hard for a long time not to push with the emergency rudder. It's good to arrive in Cape Town to give the shore crew time to prepare the boat and for the team to get some rest. It's a really long race and we have got lots of legs to go."

Telefónica Black has had a tough first leg, which effectively ended for the team when they launched of a bad wave on day 19, 29 October, crash-landed and sheared off a rudder.  The crew had to sail the rest of the course with an emergency rudder.

Navigator, Roger Nilson explains, "We have learned that we have a boat which is very past power reaching, proven from the equator to the latitude of Bahia Salvador.  Our boat is also quite fast, generally in light air, but we have problems with our speed broad reaching and running in medium and hard conditions.  Before the Canary Islands, we found ourselves left behind by Green Dragon, Puma and Ericsson 3 when sailing close to them.

"The frustration of lacking down wind speed probably led to our mistake going west of the Canaries.  Regardless of wind predictions, it was far too early to leave the fleet, a bad mistake at the time.  Approaching the Cape Verde Islands, things changed fast to our advantage as the leading boats hit the Doldrums far north and we could catch up.

"We came out from the Doldrums perfectly (day 10, 20 October) and made big gains on the leading three boats.  We were sailing smart and fast  and on night were dead even with PUMA, half a nautical mile away and we had Ericsson 4 only six nm in front after having been 150 nm behind these boat at one stage.

"At Salvador our problems started as we all began sailing more open wind angles and our speed problem came back as an old nightmare. This lack of down wind speed became even more obvious when the wind picked up and Ericsson 3 came flying past from behind.  So did our friends on Telefónica Blue, but not as fast as Ericsson 3, but still faster than us.

"It felt very frustrating to lose these two places on pure lack of boat speed.  We pushed as hard as we could, but they just passed us.  At the same time, we noticed that the three front-runners also had speeds we could not match.

"After all this frustration, the rudder just broke for unknown reasons and the story was all over.  We were limping behind the whole fleet."

The fleet will now stay in Cape Town until the start of leg two to Cochin, India on 15 November.

For full results go straight to Race Data (http://www.volvooceanrace.org/rdc/ ) by using this link and choose SCOREBOARD for a detailed breakdown of how the scores are made up.

Keywords:
Special Interests, Sponsorship
Descriptions and facts in this press material relate to Volvo Cars' international car range. Described features might be optional. Vehicle specifications may vary from one country to another and may be altered without prior notification.
Media Contacts
Related Images
Sep 10, 2008 ID: 16916 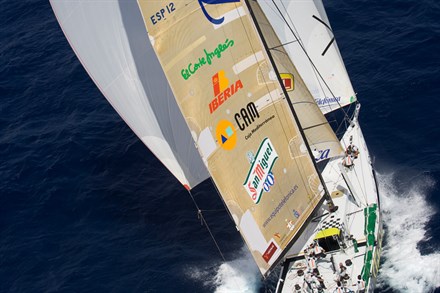