Irvine, Calif. (March 7, 2008) - Volvo Cars of North America, LLC, (VCNA) today announced it will relocate its North American headquarters by the end of 2008 to Rockleigh, N.J., where it currently has its customer care, parts and service operations.

"We have evaluated the situation in the U.S. market and decided to consolidate our headquarters operations in one location," said Gerry Keaney, senior vice president of Marketing, Sales & Service for Volvo Car Corporation.  "It is a natural choice to go back to Volvo Cars' original location in New Jersey as we already have major operations and facilities there."

Volvo's U.S. headquarters opened in 1956 in Newark, N.J., then moved to Englewood Cliffs before settling in Rockleigh in 1964.  The company moved its headquarters to Irvine in 2001 when the Premier Automotive Group building opened.  The relocation will make North American operations more efficient by bringing everyone together in one location, as well as bringing everyone three time zones closer to the Swedish headquarters.  The relocation will affect fewer than 80 Irvine employees.

VCNA also announced today the appointment of Doug Speck as president and CEO.  He replaces Anne Bélec, who has been named Ford Motor Company's director of global marketing in Dearborn, Mich.  Both appointments are effective immediately.

Prior to joining VCNA, Speck was CEO of the Premier Automotive Group in Australia and New Zealand.

"I have great confidence in Doug's strong leadership skills, as well as his deep understanding of our business," Keaney said.

During her three-year tenure as president and CEO of VCNA, Bélec, 45, managed the business during an increasingly challenging business environment.  She oversaw several successful new-model launches, including the C70, S80, C30, XC70 and V70.

In her new position with Ford, Bélec will be responsible for global marketing strategies and processes, brand positioning and consumer insights, and will report directly to Jim Farley, group vice president, Marketing and Communications.  Prior to taking the helm at VCNA, she was vice president of Sales Operations at Volvo Car Corp. and has held a variety of leadership positions in brand management, marketing and sales and service with Ford Motor Co.

"I want to thank Anne for her commitment and dedication during the last couple of years to further develop the Volvo business in the very competitive U.S. market," Keaney added.

Keywords:
Volvo People, Facilities, Sales Volumes, Special Interests, Corporate
Descriptions and facts in this press material relate to Volvo Cars' international car range. Described features might be optional. Vehicle specifications may vary from one country to another and may be altered without prior notification.
To view the full copyright information click here
Related Images
Jun 01, 2007 ID: 11625 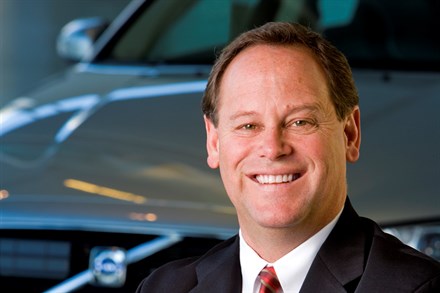