In the interior of the Volvo XC70 everything is designed to fit together.

True beauty comes from inside

A modern Scandinavian coffee table shaped like a trapezoid and the contrast between the smooth rocks and the flowing water along the west coast of Sweden.

That was what inspired designer Jonathan Disley, when he and his team designed the interior of the Volvo XC70.
"Our aim was that you should relax, feel at home and therefore be a safer driver."

According to Jonathan Disley, interior car design is like the story of the princess and the pea -the one where the princess can feel a small pea through a pile of mattresses. If something irritates you in your car's interior, however small, that irritation grows and can spoil your driving experience.

"At Volvo Cars, we always strive to make the interior as simplistic as possible, yet elegant, sporty or playful, depending on what model we are working with. I wanted the Volvo XC70 to feel a bit rugged and very capable."
One of the trickier design tasks is to make controls simple and clear, so the driver can operate them without taking your eyes and concentration off the road.

"Hands on the wheel, eyes on the road," says Disley with a smile. "We call this HMI, Human Machine Interface, and it is essential that we designers get this right."

Everyone in the world of printing knows that if you print a text in spaced-out letters; it reads more clearly, without having to change the size of the letters. Jonathan borrowed that knowledge and applied it to the car's interior, especially to the buttons and controls around the centre HMI area.
"For the expression, the design team has worked with contrast in harmony. This is where the fascinating Swedish nature comes in."

Jonathan thinks that being born in West Yorkshire, England is a clear advantage:
"The beauty of the Swedish nature may be more obvious to me than to a Swede. Truth is, Swedish nature is full of contrast."

The contrast between light and dark is a reality for everyone who lives so far north. In the winter,
it's dark most of the time. And, as compensation, the summer nights never go dark; dusky in the south, bright sunshine in above the Arctic Circle.

In the interior of the XC70, you can see this clear colour contrast, especially in the doors and the way the top of the instrument panel floats above the lower area.

The tunnel console also floats against the lower area to, as Jonathan describes it, create a tension and drama, which also appears calming at the same time, like boats floating on water.
"On the west coast of Sweden, the solid granite comes through the topsoil or the sea surface ever so often. And you have this hard, smooth rock, polished by the inland ice, in contrast to the rugged green grass or the flowing moiré pattern the wind paints on the ocean. Beautiful!"

The shape of the road traffic information display and the speaker panel by the steering wheel is inspired by a smooth rock that sticks up through the lawn in Jonathan's own back garden.
The edge of the instrument panel is split in colour, like newly fallen snow on a rooftop and the grain in the surface inspired by wind on water.

"I believe the inspiration from nature gives a soothing ease to the interior. I strive to make it harmonious," says Jonathan. Another design secret in creating a harmonious interior is to repeat a shape or a feature. This is where the coffee table comes into the story. This trapezoid-shaped, very contemporary coffee table from designer furniture-maker Swedese really took Jonathan by storm. And this inspiration manifests itself in the defroster in the instrument panel, the main décor panels andthe CD-player.

"Everywhere it's the same shape, the same feeling. It's like wearing a suit; it all fits together."

All the devoted work by Jonathan Disley and his interior design team focuses on the same goal:
to make a harmonious interior that gives a sense of well-being to everyone in the Volvo XC70.

Keywords:
Life Style, Design, 2008, XC70 (2008-2016)
Descriptions and facts in this press material relate to Volvo Cars' international car range. Described features might be optional. Vehicle specifications may vary from one country to another and may be altered without prior notification.
Media Contacts
Related Images
Jun 30, 2007 ID: 14813 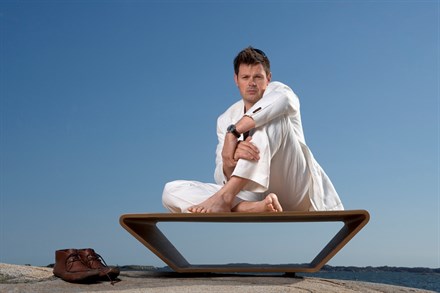 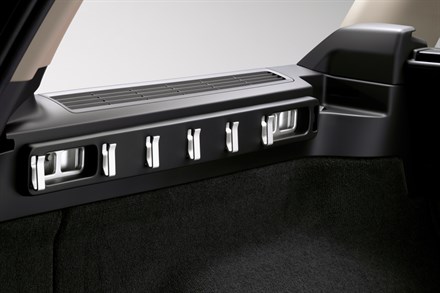