Sweden has one of the lowest road fatalities in the world. Swedish authorities and vehicle industry are often suggested to share this important knowledge with others.
Swedish and Russian authorities have an ambition to increase the exchange of experiences in the important field of traffic safety. One important step in this direction is the Traffic safety seminar in Moscow on Tuesday September 25.  Volvo Car Corporation and Volvo Truck Corporation support this initiative together with the Swedish Embassy and the Swedish Chamber of commerce.

Safety expertice gathered
The most important Swedish road safety actors are invited to share their knowledge and experience with the Russian colleagues. Together with the Volvo companies, the Swedish Road Administration, the Swedish Road Traffic Inspectorate, Chalmers University of Technology and the Brussels based safety NGO ETSC (European Traffic Safety Council) will participate.

Long safety tradition
The Volvo companies have Safety as their primary core value and they have a global recognition to be in forefront of road vehicle safety since decades. More than 70 years ago the founders of Volvo stated that "Cars are driven by people. Therefore, the guiding principle behind everything we make at Volvo, is and must remain -safety". "Volvo has continuously launched world first safety inventions, that later have become industry standards" says Ingrid Skogsmo, Director of Volvo Cars Safety Centre. One example is the safety cage, which was introduced in the Volvo PV 444 in 1944, together with the laminated windscreen, and was among the first major safety features in the company's cars. The three-point safety belt - the most important of all Volvo's inventions - appeared in 1959. This is considered to be one of the technical inventions that has saved most lives in the history of mankind.

Another example is Volvo Trucks who was the very first in the industry to introduce a Front Underrun Protection as standard on all trucks and Alcolock as a factory fitted option. In a historical perspective the three-point inertia-reel seat belts with electronic locking that was introduce back in 1979.

Knowledge based on real life accidents
Volvo's profound knowledge about how to develop safe cars, is supported by the company's extensive real life accident data base, containing more than 36,000 accidents and 60,000 people involved, as well as important specifics for heavy vehicles, such as trucks and buses. This has made it possible for us to focus on the right issues and understand the importance of a close cooperation between manufacturers of vehicles and those responsible for the infrastructure", says Lars-Göran Löwenadler, safety director at Volvo Trucks.

Focus at preventing accidents
Many of the safety systems in Volvos cars and trucks help the driver to avoid accidents from occurring. In the later years, Volvo has presented a number of preventive safety systems. Many of the most recent inventions were presented in the Integrated Safety Truck in Versailles in September. At the Frankfurt Motor Show in the middle of September, Volvo Cars launched systems that detect if the driver lacks concentration (Driver Alert Control) or keep too short distance to the vehicle in front (Distance Alert).

The Swedish zero vision
The Volvo companies also take an active part in the Swedish ambition to significantly reduce the accidents on the Swedish roads - the Vision Zero. In 1996, the Swedish government established the Vision Zero accidents on the Swedish roads, including the intermediate target to half the road fatality figure in ten years, from 1997 to 2007. "We contribute to this long term work by presenting preventive technologies that help avoid accidents and protective systems that, in the case of an accident, can help to avoid injuries and save lives", says Ingrid Skogsmo. "Sweden has one of the lowest road fatality figures in the world. This is the result of a since long established collaboration between the authorities, the academia and the vehicle industry in Sweden; to go for a common target, i.e. to save lives on the roads", Lars-Göran Löwenadler concludes.

Keywords:
Safety, Corporate, Sponsorship
Descriptions and facts in this press material relate to Volvo Cars' international car range. Described features might be optional. Vehicle specifications may vary from one country to another and may be altered without prior notification.
Media Contacts
Related Images
Aug 30, 2005 ID: 9373 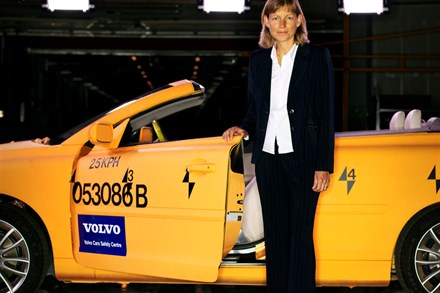 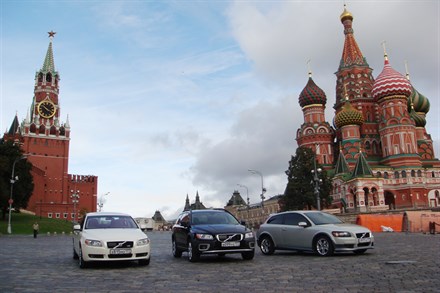