Launch
The Volvo XC90 was launched in early 2002 as the first purpose-built SUV (Sports Utility Vehicle) to come from Volvo Cars. It is also Volvo's first seven-seat car since the 1940s. The Volvo XC90 has electronically controlled All-Wheel Drive. It has the capacity to forge ahead on very poor roads, but is primarily intended as a spacious passenger car with excellent driving manners, immense safety and intelligent versatility.
Business project manager: Hans Wikman

Design
Five-door SUV - a crossover model that combines the passenger car's comfort and comfort with excellent get-you-there ability and flexibility. The Volvo XC90 is designed to give a robust yet at the same time compact and elegant impression. It is built as a passenger car, with a unitary body and the same type of chassis as that found in Volvo's sedan models - unlike some other SUV models that are built on a truck chassis. The Volvo XC90 comes with five or seven seats, depending on specification. The passenger compartment is very spacious, thanks not least to Volvo's modern powertrain concept with transverse engine installation.

Safety
Volvo Cars adopts a holistic view of safety that encompasses both Preventive and Protective safety.
Preventive safety is closely linked to the car's driving properties. The body of the Volvo XC90 features immense torsional rigidity and the car has a sturdy chassis, a combination that results in consistent, predictable behaviour on the road (see also under "Powertrain and Chassis"). Ground clearance is high to offer good get-you-there ability on poor roads. Despite this, the floor is set low down, which contributes to the car's low centre of gravity and excellent directional stability.

Active Bi-Xenon Light - moving headlight beams that follow the curvature of the road - help maintain the best possible visibility in the dark on twisting roads.

The exterior systems have the task of distributing and absorbing incoming collision forces so that the passenger compartment remains as intact and undamaged as possible. Thanks to its unitary body, the Volvo XC90 has been able to be built with the same type of deformation zone as Volvo's other car models. The body is built in the form of a metal cage where all the components interact with one another to ensure controlled deformation.
A gently rounded front and an extra beam below the front bumper help reduce the risk of injury to other road users.

Powertrain and chassis
The Volvo XC90 was launched with a range of five- and six-cylinder engines. All are fitted transversely in keeping with Volvo's modern powertrain concept. They are designed to operate smoothly, with low vibration and high torque across a wide rev range. The T6 engine is a potent high-performance unit with twin turbochargers.
In autumn 2004, a powerful aluminium V8 engine was added to the range, mated to a six-speed automatic transmission. The V8 engine too is installed transversely.

The environment
The Volvo XC90 is designed and equipped to impact as little as possible on the global environment and to offer a clean and healthy interior climate. Petrol engines with low internal friction, efficient combustion and advanced exhaust filtration technology result in low emissions. Energy-efficient diesel engines with particle filters produce low emissions of carbon dioxide and soot particles.

The engines in the Volvo XC90 can be optionally specified with a catalytic radiator coating - PremAir®. This system converts harmful ground-level ozone into pure oxygen as the car drives. Its benefits are greatest in dense city traffic and in strong sunlight. Volvo's IAQS (Interior Air Quality System) effectively reduces the amount of particles, pollen, gases and certain unpleasant odours in the air entering the cabin. All the textiles and leather upholsteries are certified according to ÖKO-TEX 100, an international standard that ensures that the interior trim is free from allergy-producing and hazardous substances.

Keywords:
XC90 (2002-2014), 2007
Descriptions and facts in this press material relate to Volvo Cars' international car range. Described features might be optional. Vehicle specifications may vary from one country to another and may be altered without prior notification.
Media Contacts
Related Images
May 09, 2006 ID: 9921 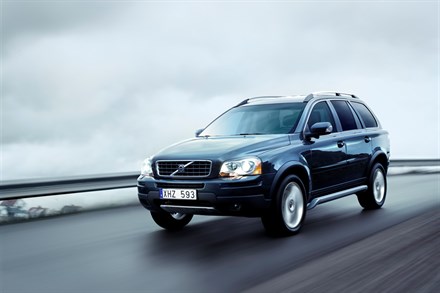 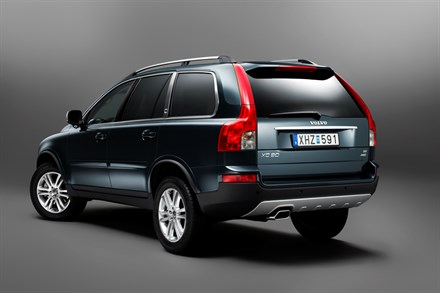