Launch
The all new Volvo S80 is the second generation of Volvo’s large prestige sedan, launched at the Geneva motor show in spring 2006. The new S80 model is a luxurious car with an elegant and dynamic profile influenced by modern Scandinavian design.

A powerful V8 engine and a newly developed, particularly compact six-cylinder in-line engine provide performance and driving comfort of absolute top class. The V8 engine features Volvo’s electronically controlled All-Wheel Drive. An active chassis is available as an option, contributing to the car’s highly dynamic driving characteristics. A new generation of driving and support systems together with a further-enhanced body structure and advanced interior safety systems all interact to contribute to the high level of safety, both preventive and protective.
Business project manager: Silvia Güllsdorf

Design
Four-door sedan.
The all new Volvo S80 has the same overall length as its predecessor (4850 mm), but is 27 mm broader and 34 mm taller. The wheelbase is longer and the track is wider. All this creates entirely different proportions, with added stance and dynamism in the car’s visual expression. In order to give the car a solid and compact image, the contours have been rounded and the bonnet has a raised profile. The headlamps, which are positioned lower down than in the previous S80 model, follow the curvature of the front and have been extended along the side and up towards the bonnet, creating a gentle smile at the front.

The doors are more convex and pronounced in shape. They now also include the rearmost side window. The shoulder line is both higher and broader than before, and the sills have a more pronounced profile, creating a visually lower centre of gravity and imparting a steadier, more stable appearance.

In order to give the all new Volvo S80 the right aura of elegance and create an image of being in constant motion, the car has more sweeping lines than before, with a comet-shaped profile, an almost imperceptible transition between the rear window and the boot and an abruptly cut-off tail section.

The car’s Volvo heritage is marked by a somewhat larger, vertical grille. The bonnet’s characteristic V-shaped lines have been extended all the way down into the spoiler. And those typical Volvo tail lamps now have a slimmer profile that blends in smoothly with the broad shoulders. LED lights at the top enhance the Volvo heritage clearly even in the dark.

The interior design is characterised by clean surfaces, harmonious lines, exciting contrasts and smooth function – expressions of Scandinavian design tradition that help forge a dynamic and harmonious interior atmosphere.
The recurring design themes are the sweeping parallel lines that mark the edge of the instrument panel and door panels, and the rectangular shape with its rounded corners that characterises free-standing functions such as the ignition lock and air vents.

The new Volvo S80 has a super-slim centre console similar to the one introduced earlier in Volvo’s medium-segment models. In the S80, the centre console has been modified to blend in seamlessly with the car’s more classic and exclusive design, and it extends all the way to the rear seat.

If the car is equipped with power front seats, they can be optionally specified with upholstery in perforated and ventilated leather. Fans in the seat cushion quickly reduce cushion temperature to a pleasant level and contribute to high seating comfort. The rear seat splits and folds. The front passenger seat backrest can also be folded.
The top model in the range is the exclusive Volvo S80 Executive, featuring equipment and comfort of an exceptionally high level.

Safety
Volvo Cars has a holistic approach to safety which encompasses both preventive and protective safety.
Preventive safety – the avoidance of accidents – was one of the most important starting points when the new S80 was being developed. It led to the creation of an entirely new generation of advanced driving and support systems.

Adaptive Cruise Control (ACC) uses a radar sensor to help the driver maintain the distance to the vehicle in front. ACC should primarily be seen as a comfort-enhancing function, but it contributes at the same time to more controlled driving when the traffic rhythm is uneven.

Collision Warning with Brake Support (CW) helps avoid rear-end impacts, minimising the risk of such collisions. If the car approaches another vehicle from behind and the driver does not react, the system alerts the driver with audible and visual signals. If the risk of a collision nonetheless continues to increase despite the warning, the brake support system is activated. The brake pads are applied against the discs and brake pressure is hydraulically amplified.

The all new Volvo S80 is also equipped with BLIS (Blind Spot Information System) and IDIS (Intelligent Driver Information System), two innovations that help the driver maintain better control over the traffic situation.
BLIS registers if another vehicle is in the offset rear blind spot alongside the car and alerts the driver via a visual signal.

IDIS helps stop the driver being distracted by non-essential information in pressing situations, for instance by delaying incoming phone calls or SMS.

Active Bi-Xenon Light – moving headlight beams that follow the curvature of the road – help maintain the best possible visibility in the dark on twisting roads.

The information is stored so that it is possible to check if the car really was locked when it was parked, at any time and from anywhere.

Protective safety in the new Volvo S80 is structured in the form of a network of exterior and interior safety systems that interact to reduce the risk of occupant injury in the event of a collision. The exterior systems have the task of distributing and absorbing incoming collision forces so that the passenger space is preserved as intact as possible. The body is therefore built in the form of a box-section structure using varying grades of steel, with all the components interacting to provide controlled deformation.

Like the rest of the Volvo range, the new Volvo S80 features a transversely installed engine and front-wheel drive. Transverse engine installation provides more deformation space in the engine compartment and helps reduce the risk of engine intrusion into the passenger compartment in a frontal collision. The larger six- and eight-cylinder engines have also been able to be installed transversely in the new S80 model thanks to their extremely compact dimensions and effective packaging.

The purpose of the interior safety systems is to keep the passengers securely in place and to minimise the risk of serious injuries. In order to provide the most effective protection possible, Volvo Cars has developed a number of unique systems. A new type of side-impact airbag makes Volvo’s patented SIPS (Side Impact Protection System) even more effective. The new side-impact airbags feature two separate inflation chambers – one at hip height and one at chest height. Since the hips can withstand greater impact than the chest can, the lower chamber is inflated at five times higher pressure than the upper section. The side-impact airbags interact with the inflatable curtains (IC) and the body’s network of beams to protect as effectively as possible. Volvo’s system for avoiding neck injuries – WHIPS (Whiplash Protection System) – is one of the most effective on the market. In the event of a severe impact from the rear, the front seat backrest and head restraint move together with the occupant’s body, thus damping its movement much like the way the arms move rearward when catching a ball. In the latest generation of WHIPS, the system’s function has been further developed to provide an even smoother “catching” motion.

All five seats are equipped with three-point inertia reel safety belts, belt pre-tensioners and head restraints. The highest possible safety requires that all occupants always use their safety belts.

Driveline and chassis
Like the rest of the Volvo range, the new Volvo S80 has a transverse driveline and front-wheel drive, or alternatively All-Wheel Drive (AWD). The transverse engine installation permits effective space utilisation for deformation in the engine compartment and also makes it possible to create a more spacious passenger compartment.

The new Volvo S80 is the first of Volvo’s sedan models to be equipped with the compact, transverse V8 engine that was first launched in the Volvo XC90. A unique design with a mere 60 degree angle between the two banks of cylinders makes the V8 remarkably compact.

The new Volvo S80 is also available with an entirely new highly efficient six-cylinder in-line engine made of aluminium. The new in-line engine features an advanced valve train with two lift heights and a variable intake system that contributes both to good performance and considerable fuel efficiency. Several innovative solutions have also made it possible to build the new engine within particularly compact overall dimensions. There are five-cylinder engines on offer as well, including the highly energy-efficient second-generation D5 Volvo turbodiesel and a petrol engine with a light-pressure turbocharger.

The chassis with MacPherson struts at the front and Multilink axle at the rear is designed to ensure predictable driving manners and alert steering response. The Multilink rear axle is an independent suspension system with a number of links that are set up to provide a combination of controlled wheel movements and high ride comfort. Some of the links have the task of providing a certain degree of anti-skid steering effect. A long wheelbase and wide track together with an extremely torsionally rigid body contribute to the well-controlled driving manners.
The new Volvo S80 with V8 or six-cylinder engine can optionally be specified with an active chassis based on Volvo’s Four-C technology. With this system, the chassis setting is automatically adjusted to suit the current driving situation, thus improving both handling and ride comfort. Three alternative chassis settings allow the driver to alter the car’s driving behaviour to suit his or her personal tastes at the mere touch of a button. The V8 version of the new Volvo S80 is equipped with Volvo’s All-Wheel Drive. The AWD system uses an electronically controlled hydraulically activated clutch to distribute power between the front and rear wheels to provide the best possible road grip in all situations.

helps the driver bring the car back in line if there is any tendency to skid.

The environment and air quality

The engines in the new Volvo S80 can be optionally specified with a catalytic radiator coating known as PremAir®. This system converts harmful ground-level ozone into pure oxygen as the car is driven. Its benefit is greatest in dense traffic and strong sunlight.

Volvo IAQS (Interior Air Quality System) effectively reduces the amount of particles, pollen, gases and certain unpleasant odours in the air that enters the passenger compartment. All the interior fabrics and leather used in the upholstery are certified according to ÖKO-TEX 100, an international standard that guarantees that the interior is free from allergenic and hazardous substances.

The climate unit can also be supplemented with the Clean Zone Interior Package, an advanced system that provides healthier air quality inside the passenger compartment (approved by the Swedish Association against Asthma and Allergy). When the car is unlocked using the remote control, the passenger compartment is automatically ventilated for about a minute if the outdoor temperature exceeds 10 degrees Celsius.

Keywords:
S80 (2007), 2007
Descriptions and facts in this press material relate to Volvo Cars' international car range. Described features might be optional. Vehicle specifications may vary from one country to another and may be altered without prior notification.
Media Contacts
Related Images
Mar 17, 2006 ID: 9803 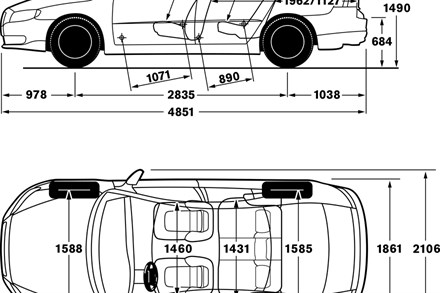 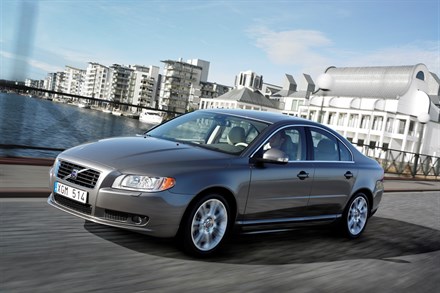 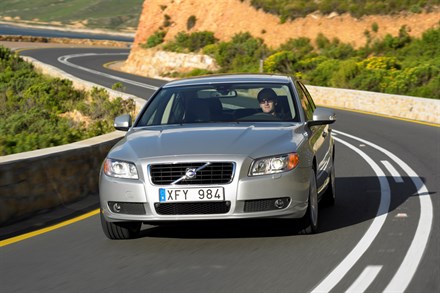