Steeped in Scandinavian sensibility, the new Volvo S80 luxury sedan offers a tasteful array of comfort and convenience systems designed to improve – rather than overwhelm – the experience for driver and passenger. Simplistic and intuitive controls direct a myriad of technologies including the world-class audio system, Bluetooth cellular phone connectivity, a new adaptive cruise control and an enhanced navigation system.

The new Volvo S80 is available with a choice of two audio system levels:

While all audio systems provide an enjoyable listening experience, it is the Premium Sound option that will immediately appeal to customers who are looking for a world-class audio system. Premium Sound features products from some of the most advanced audio manufacturers in the world. Controlled from the slim centre stack, the audio stream first travels through Dolby Pro Logic II Surround sound processing. Now a very common technology throughout Volvo vehicles, Dolby Pro Logic II Surround distributes audio signals throughout the cabin to create a natural listening experience.

But prior to the audio stream reaching the loudspeakers, it must first pass through Digital Signal Processing (DSP) and Bang & Olufsen’s ICEPower technology housed inside the five efficient Alpine digital class-D amplifiers. While DSP adjusts the audio curve for a more authentic sound quality in an automobile, ICEPower cleans up the signal, correcting errors that naturally occur during audio amplification.

The sound is also adjusted automatically to suit driving conditions. Volume and tone are adjusted to match the car’s speed. The S80’s menu system allows for three personal preferences that dictate how much the sound reacts to the driving conditions.

Finally, 12 Dynaudio loudspeakers are strategically placed throughout the cabin to surround passengers in sound. Loudspeakers from the Danish speaker company have been a popular option in other Volvo models. “Volvo and Dynaudio both share the same uncompromising attitude toward audio quality,” explains Güllsdorf. “Together, we have acquired in-depth knowledge about the effect a car’s interior can have on sound. The result is truly high-class audio reproduction. That is why we’re placing the Dynaudio logo on the instrument panel of the all new Volvo S80. The system represents a crowning achievement for both our companies.”

“We are very proud of the audio experience we can offer in the all new Volvo S80,” says Güllsdorf. “It’s easy to forget that you’re actually in a car, and not in a concert hall.”

Courtesy of Bluetooth® technology, drivers and passengers will be able to use a cell phone – hands-free – in combination with the car’s loudspeakers. With a Bluetooth-enabled cell phone, the driver will be able to make and receive calls, read SMS messages and access the phone directory without plugging the phone into the car. Bluetooth automatically recognizes the pocketed cell phone and wirelessly connects it to the hands-free system.

“In this way, you are truly mobile,” says Güllsdorf. “No switching between different phones and no delay when getting out of the car. And you don’t need to stay sitting in your parked car just because you’re in the middle of a handsfree call. You simply pick up the call on your cell phone and leave the car, continuing your conversation without interruption.”

The S80’s Adaptive Cruise Control system will not only help drivers maintain a safe distance to vehicles in front, it also serves as the platform for several other convenience systems. A radar sensor continuously measures the distance to vehicles ahead and automatically adjusts the speed of the S80 to maintain a safe distance. The driver activates the cruise control, setting the desired maximum speed (from 30 km/h) and chooses the minimum time interval to vehicles in front. There are five different time intervals from which to choose.

The Collision Warning with Brake Support system works in concert with the Adaptive Cruise Control to help avoid rear-impact collisions or to minimize their effect.

If the S80 approaches another moving vehicle from the rear, and the S80 driver does not react, a red warning light flashes on the windscreen. At the same time, an audible signal can be heard. In certain situations, this is sufficient for the driver to react and avoid the hazard.

If the risk of a collision increases, despite the warning, Brake Support is activated. The brake pads move against the discs in anticipation of a hard stop. The brake pressure is also reinforced hydraulically, ensuring effective braking irrespective of the pressure applied to the brake pedal.

If the S80 driver brakes hard, the brake lights will flash to warn the drivers behind. Hazard warning lights are also activated when the speed is reduced to less than 30 km/h while the system is activated.

The Volvo navigation system navigation system has been further refined in a number of ways. There is a wider range of maps and several new countries have been added, mainly in Eastern Europe. There are now three DVD discs for Europe and three for the North America (including Hawaii). The contents have also been updated with the latest roads, restaurants and hotels.

The system has been further enhanced with a new processor, which among other things makes for far faster route searching than before. New information such as the national flag and facts about the country, speed limits and rules governing phone use while driving all appear on the screen whenever you cross a national border.

“Convenient and functional systems give the Volvo S80 owner simpler, more comfortable travel,” says Güllsdorf. “And it is made all the more handy with large controls, easy to read displays and logical interfaces. These aren’t simply there for added comfort, ease of use also means added safety on the road.”

Keywords:
S80 (2007), Interior, Technology, Special Interests, 2007
Descriptions and facts in this press material relate to Volvo Cars's international car range. Described features might be optional. Vehicle specifications may vary from one country to another and may be altered without prior notification.
Related Images
Feb 28, 2006 ID: 3566 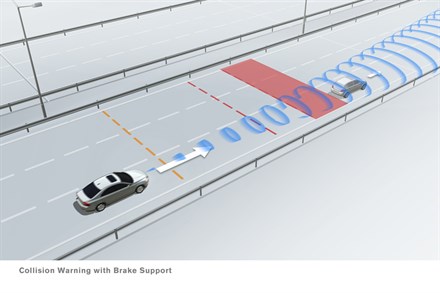 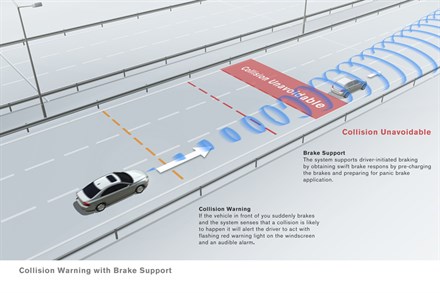 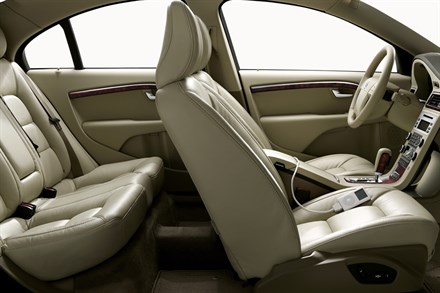 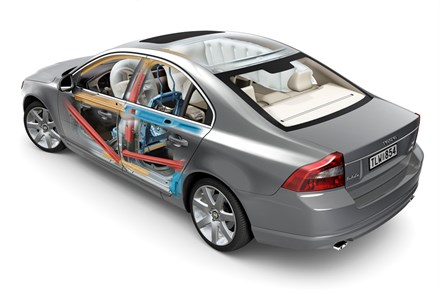