Volvo Cars wins "best use of Facebook" at inaugural DigiAwards

CorpComms, a leading UK marketing magazine, has awarded Volvo Car Corporation the 2010 Digi Award for "Best use of Facebook". The category recognises best practice in Facebook communications and was in recognition for the brand's Geneva Motor Show and the Crash Test Centre 10th anniversary campaigns celebrated earlier this year.

"This prestigious award is very encouraging for Volvo Cars' PR team and our partner, OgilvyPR. We aim to exceed the expectations at every event and this award is a great confirmation that we are on the right track", said Peter Ganjbar, Volvo Cars Manager Broadcast & Social Media Relations.

Volvo Cars recognized the opportunities offered by the global unveiling of the Volvo S60 at the Geneva Motor Show and the 10th anniversary of the Volvo Crash Test Centre as touch-points for Facebook engagement. Aimed at providing a rich experience for the brand's growing fan base, the campaigns broke new ground for both event marketing and social media.

The Digi Award jury stated: "Being flexible in approach, and incorporating not only pre-conceived content but also on-the spot creative ideas that included competitions, direct responses to fan enquiries, and appropriate communication of a test failure, made the reporting of the Crash Test Lab anniversary event on Facebook a resounding success. The ability to report live and creatively interact with the community paid dividends in community feedback and fan numbers with OPR noting a significant increase in Facebook interactions on the Volvo fan page".

"The key to success was the creation and timely distribution of engaging and a relevant content from each event, including quick polls, photos, videos, Q&A:s and interviews. We feel that Facebook allows us to truly engage with a global community, ensuring consumers and fans alike are provided with a rich multimedia experience", said Peter Ganjbar.

"We are lucky at Volvo Cars to have an Executive Management Team which fully understands the importance of social media and the direct and honest conversations the brand is able to have directly with the community. The Management, the Volvo spokesmen, the Volvo staff and last but not least the OgilvyPR team have come together around Volvo Cars' fanpage on Facebook and created a winning concept that provides a truly immersive brand experience", said Peter Ganjbar.

In today's communication landscape it's a known truth that branded social media platforms are not about pushing content to users, it's about conversation. "We ask the community what they want from us, and we listen and try to fulfill their wishes. The awarded activities are examples of our focus on encouraging and supporting real conversation with the army of fans around the world", said Peter Ganjbar.

Volvo Cars prides itself in its approach to social media ensuring the community is provided with an opportunity to truly experience our brand values. "We feel the DigiAwards recognizes our open and conversational approach to Facebook communications and we look forward to building on this further over the coming years", said Peter Ganjbar.

Facts & Figures from the Volvo Facebook "take-over" activity in 2010:

Keywords:
Awards, Mission
Descriptions and facts in this press material relate to Volvo Cars's international car range. Described features might be optional. Vehicle specifications may vary from one country to another and may be altered without prior notification.
Related Images
May 15, 2008 ID: 15293 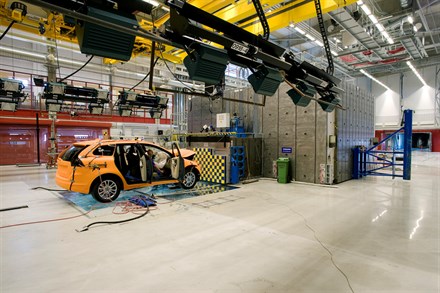