GÖTEBORG (January 16, 2006) – The first audio head unit that bore the Volvo name was presented in 1969. Since then, Volvo Car Corporation, together with leading audio equipment manufacturers, has developed high quality audio systems and introduced a number of world-firsts. Among other things, Volvo introduced the world’s first RDS radio in 1987 and the first in-car audio system equipped with Dolby Pro Logic Surround Sound processing in 1997. The current Dolby Pro Logic II technology that can be found in every Volvo vehicle was developed for the 2002 launch of the Volvo XC90.

“A high-class sound system is essential to the total premium experience in Volvo vehicles,” says Lex Kerssemakers, Senior Vice President Brand, Business & Product Strategy with Volvo Cars. “We know from interviews with our customers that a premium audio system is high on their list of priorities when a car is purchased.”

Independent research shows the same results. A high-class audio system ranks among the five most important features in a vehicle. A J.D. Power study in 2002 and 2003 revealed that 79 per cent of automobile customers feel that sound quality is “very important” when they choose an audio system. This puts great demands on the manufacturers of cars and sound systems.

Volvo Cars, which develops its own sound systems and components internally, is constantly striving to be at the forefront with respect to in-car sound quality. Volvo’s top-of-the-line, Premium Sound system uses the latest in audio technology to satisfy the most demanding automotive audio customer.

The foundation for today’s Premium Sound system began in the mid-1990s when the first generation Volvo C70 was developed. The explicit objective was for the car to have the world’s best factory-fitted audio system. To achieve this, Volvo Cars turned to Dolby Laboratories and introduced the first in-car audio system equipped with Dolby Pro Logic Surround.

The first generation C70 also featured speakers from Danish speaker manufacturer Dynaudio. After the introduction, an accessory system was developed for the existing S70 and V70 models, based on Dynaudio loudspeakers. As of 2003, they were also available in the Volvo S80.

The first generation Dolby Pro Logic Surround technology, which was initially developed for home cinema systems, converted two-channel stereo sound to a more natural four-channel listening experience (left, right, centre, and surround). The adaptation of the system to be used in vehicles was the result of collaborative efforts between Volvo Cars and Dolby Laboratories.

“It began with an internal special assignment in conjunction with the project planning for the first generation C70,” says Hans Lahti, a technical specialist in the Audio department at Volvo Cars. “We wanted to determine if it was possible to improve the stereo listening experience in a car. Was it possible to circumvent the problem of always sitting close to the loudspeakers on one side of the car, which was at the outer edge of the stereo sound pattern?”

At that time, home cinema systems were a relatively unknown concept. However, there was expertise on multi-channel sound for cinemas in Volvo’s audio group, as well as experience from previous tests with four-channel stereo.

“We tested a Dolby Pro Logic decoder from a cinema system combined with a centre loudspeaker,” says Lahti. “And this resulted in an obviously better sound pattern, with a clearer ‘image’ of the soloist’s position on the stage.”

After these tests, it was natural to contact Dolby Laboratories in San Francisco. Since their start in 1965, Dolby had worked with the development of high-quality sound systems and advanced surround technology for cinemas and home cinema systems. This contact revealed that Dolby had also conducted tests in cars. Among other things, they had built a prototype system in a Volvo car.

“So collaboration had begun without any of us being aware of it,” says Lahti.

Through combined efforts, Dolby’s decoder was adapted to the conditions in the cabin of a car. Among other things, this meant that the centre of the “soundstage” could be moved laterally from the centre of the car to a spot directly in front of the listener, regardless of whether they were in the driver or passenger seat.

Collaborative efforts between Volvo and Dolby were successful and when the first C70 model was introduced in 1997, it also marked the premier of a factory-fitted surround sound system in a car. The listening experience offered by the C70 resulted in the “Best of the Best 2001 award” by the Robb Report in the United States. The surround sound system was subsequently also made available in other Volvo models.

“The joint efforts between our sound technicians and Volvo’s have been very successful,” says Martin Lindsay, Director of Business Development for Automotive Entertainment at Dolby Laboratories. “Together, we have learned a great deal, which has led to continued collaboration and a number of innovations. One example is the unique centre loudspeaker, which in one stroke ended the war for the soundstage between the driver and the passengers with the balance control.”

When Dolby Laboratories’ and surround sound veteran, Jim Fosgate, wanted to develop the second generation of surround sound, Dolby Pro Logic II, Volvo was a natural partner. This was in conjunction with the development of Volvo’s first SUV, the Volvo XC90. The car was to have seven seats, divided into three rows, and it was important for the passengers sitting at the rear to also have a natural sound experience.

“Jim Fosgate had fitted his own 1990 Lincoln with a prototype system for 5.1 channel surround sound derived from a two-channel stereo source, based on an enhanced decoder for surround sound,” says Lahti. “Test listening in his car was a very positive experience. The sound was very natural and open, with a great deal of width, even in the rear seat.”

The finished product was a unique surround processor that works digitally, and essentially functions equally well for different types of music. Through Volvo’s participation, the processor was adapted from the outset to the conditions in the car, and the Volvo XC90 became the first car in the world with the second generation Dolby Pro Logic II.

“Dolby Pro Logic II Surround reproduces music in a natural way, with a wider soundstage in the front seat and improved stereo effect and full bandwidth in the rear seat,” says Lahti. “Furthermore, the sound from the front and rear loudspeakers is mixed into a more natural whole. Even Jim Fosgate was positively surprised when he heard how good the XC90 audio system sounded.”

“Volvo’s uncompromising attitude towards high-quality audio entertainment corresponds well with our own,” says Lindsay of Dolby. “Our brands complement each other beautifully and the combined technical know-how contributes to providing the car owner/listener with a more genuine sound experience.”

Keywords:
Interior, Quality, Technology, Special Interests
Descriptions and facts in this press material relate to Volvo Cars's international car range. Described features might be optional. Vehicle specifications may vary from one country to another and may be altered without prior notification.
Related Images
Jan 13, 2006 ID: 3480 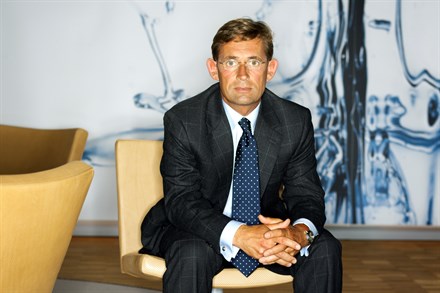