TORONTO (November 1, 2005) – When the seven competing boats begin their first in-port race to kick off the 2005-2006 Volvo Ocean Race on November 5 in Sanxenxo, Spain, it will mark the culmination of more than three years of hectic practice, preparation and yacht development -- with some definitive Canadian input.

The Volvo Ocean Race is a grueling eight month, around-the-world race aboard sleek sailing sloops manned by 10-person crews. The boats will travel 31,250 nautical miles over nine legs, stopping at 10 ports around the world, as well as taking part in seven in-shore races. The crew, sustaining themselves on freeze dried food and up to 20 vitamin pills per day, must endure impossibly rough seas, strong winds and temperature variations from -5ºC to +40ºC. Past Ocean Race participants have been known to lose up to 11 kg (25 lbs.) in one sailing leg alone.

The boats, called Volvo Open 70 yachts, must endure the unrelenting elements, support the crew and travel at the fastest possible speed every minute they are underway. To optimize performance, the hull design is a feat of engineering wizardry. But before the crew is ready to entrust their lives to a new boat, highly trained engineers are brought in to test the hull design in a secure environment that simulates some of the harshest and most extreme conditions imaginable.

For Farr Yacht Design, commissioned to design four of the seven boats, it meant a journey from their Annapolis, Maryland, home base to Canada’s east coast. Oceanic Consulting Corporation and the Institute for Ocean Technology (IOT), both based in St. John’s, Newfoundland, was the site of the prototype testing in a model ocean environment. Oceanic Consulting Corporation works in partnership with IOT and specializes in ocean engineering and marine performance evaluation.

“We went to the Institute in St. John’s to test our designs for the Volvo 60’s used in the last race,” says Britt Ward, lead research naval architect from Farr Yacht Design. “We have good relationships with the folks at the IOT facility through our America’s Cup tank testing program and our Volvo 60 test work for the last race, so it made sense for us to continue a winning strategy.”

“We can simulate a range of severe conditions, from a calm blue ocean to the frigid arctic to extreme seas,” says Lee Hedd, Senior Naval Architect and Principal Consultant, Ships and Yachts, from Oceanic Consulting Corporation. “By putting an accurate scale model of a vessel into this kind of environment, we can gather invaluable data about how it will perform in the real world. For the VO70, we isolated the fine force and moment details acting on the hull in order to understand the performance envelope of the new design with a wide assortment of configurations and various conditions.”

Oceanic used IOT’s 200 metre (656 ft.) state-of-the-art towing tank with a capacity of more than 16,000 litres and a custom force and moment dynamometer to test the forces acting on the 7 m scale model VO70. This yacht dynamometer was specifically designed and developed by IOT for the sole purpose of providing the most accurate sailing yacht test data in the world.

Hedd and his team were interested in measuring the lift and drag experienced by the boat. The model is suspended from the dynamometer using a vertically mounted post on the overhead carriage and fitted with load sensors to measure the magnitude and direction of the forces exerted on it as the boat is towed through the water. Over multiple runs, where the model is set up in different configurations, the relative lift and drag measurements are collected, from which a full picture of the hull’s performance becomes clear.

“The volume of data we gather can be staggering sometimes, and it’s also a time consuming process,” says Hedd. “Once we complete one test, it takes time to set up the model again and wait for the wash from the previous run die down. That translates to roughly four or five runs per hour. For the Volvo Open 70 design, we completed hundreds of different tests across several weeks.”

For Farr Yacht Design, choosing to do tank testing was virtually a non-issue. Teams movistar, Brasil 1, The Black Pearl – Pirates of the Caribbean II and Ericsson will enter with boats from the Farr design team’s pen. “Prior to receiving any commissions for the design of Volvo 70’s, we commenced our research program and booked time with Oceanic for the important tank testing work,” says Ward. “We have a long and fruitful relationship with Oceanic and the Institute for Ocean Technology in Newfoundland and know they take the necessary care in their work to produce results for the experiments that provide reliable design guidance.”

Keywords:
Events/Activities
Descriptions and facts in this press material relate to Volvo Cars's international car range. Described features might be optional. Vehicle specifications may vary from one country to another and may be altered without prior notification.
Related Images
Nov 01, 2005 ID: 3324 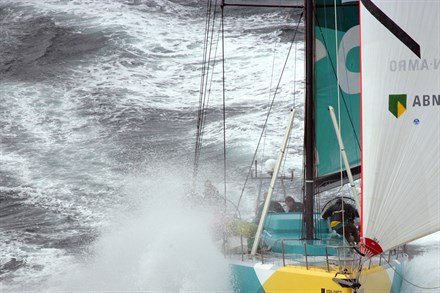 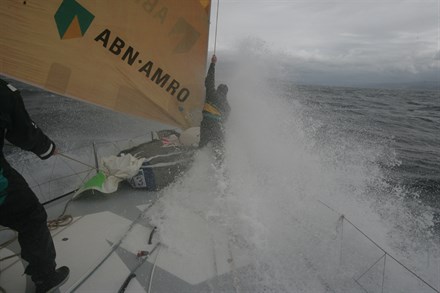