Volvo Cars global sales continued to grow at a steady pace in April, up 7.4 per cent compared with the same period last year.

Total sales during the month reached 56,535 cars with all the regions, of China, US and Europe reporting a growth in volumes compared with the same month last year.

Sales in the January-April period stood at 217,855 cars, up 8.9 per cent compared with the same period last year.

The volume growth in April was led by continued strong demand for Volvo’s award-winning SUV range led by the XC60, and followed by the XC40 and XC90. Volvo’s latest models, the V60 estate and the US-built S60 sedan, also contributed to the increased volumes.

China reported a strong sales growth of 16.8 per cent in April compared with the same period last year. Total sales in the region reached 12,192 cars during the month. The growth was on the back of high demand for the locally assembled XC60 and S90 models.

US sales reached 8,367 cars for the month of April, up 0.4 per cent compared with the same period last year. XC90 was the highest selling car in the region followed by the XC60.

A detailed regional break-up of sales is given below.

Keywords:
Sales Volumes
Descriptions and facts in this press material relate to Volvo Cars's international car range. Described features might be optional. Vehicle specifications may vary from one country to another and may be altered without prior notification.
To view the full copyright information click here
Related Images
Jan 04, 2019 ID: 247431 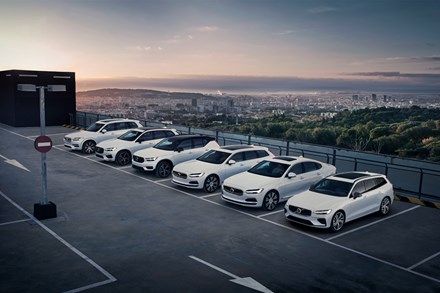