Designer Anna Rosèn's exterior styling of Volvo Car Corporation's Your Concept Car (YCC) attempts to strike a balance between being functional and user friendly and, at the same time, sporty and emotional.

To accomplish that, Rosèn, one of the YCC's all-female development team, designed these features into the YCC:

High on the YCC wish list was superior visibility, aimed at ensuring drivers can see all four corners of YCC to make the car easier to park and steer through tight spots. That was accomplished with the low front end and a rear window that extends almost to the rear of the vehicle.

The overall effect is reminiscent of the Volvo P1800, a sporty car that gave the driver a clear view ahead and behind.

The lines of the YCC's 'catwalk' - the nearly-horizontal area just beneath the side windows -- give it a look which is muscular and elegant at the same time.

Rosèn says: "It was important to combine beautiful, flowing lines with a muscular look. The strong front end gives a sense of speed, the line flows over the front wheel, then drops toward the rear."

The YCC is as big as the Volvo S60. A variable ride-height function enables it to be raised or lowered either when driving or when parked. It is a car that looks both sporty and robust while the exterior design strives for a balance between these characteristics.

Bumpers and lower side sections are made of a tough, durable material, for an enhanced functional feel. The upper body panels have been finished in Chameleon, a "flip" (colour-change) paint with an iridescent, silky look. Depending on the light, the exterior flip colour changes from green to gold or blue to yellow.

"We chose a paint that would bring out the lines of the car to best advantage," says Maria Uggla, the colour and trim designer.

Headlights and taillights are important elements of the YCC's styling. The headlights are lenses of transparent thermoplastic which project the light from banks of LEDs. The effect is that of light emanating from a block of ice - no bulbs or LEDs visible, just light.

In the rear light clusters, the red section flows seamlessly into the yellow.

The YCC was designed with wide side-door openings for better display of the car interior, for easier back-seat loading and unloading, and to make it an easier car to get in and out of.

Eye-catching gull-wing doors with a short wingspan were the perfect answer for the YCC. When closed, the gull-wing door extends only as far as the bottom of the painted body sections. That is only 60 cm out from the car when opened, which is less space than many conventional car doors need to open fully.

As the gull-wing door opens upward, the sill section below it opens out and down, which means there is no high sill to climb over and that the surface presented is always clean.

Another advantage of the door design is that the B-pillar has been moved farther back,

further enhancing the driver's view of the road.

The YCC has made maintenance and car care about as easy as it can get.

"We want cars to make life easier for their owners, not complicate things for them," says project manager Eva-Lisa Andersson.

Focus groups confirmed that most people never open the hood of their car unless it was to fill it with windshield washer fluid. So, YCC does not have a conventional hood -- just two cap-less ball-valve filling points like those used for racing cars beside the door on the driver's side. One is for gasoline and the other for washer fluid, so there's no fumbling with filler caps or hood latches. (The front body section is removable by the dealership for regular service.)

Volvo service staffs are the only ones who ever need to access the engine, when the time comes for routine service. When service is due, the car automatically notifies a service centre of the owner's choice. The service centre then suggests an appointment time.

Keywords:
YCC, Special Interests, Concepts
Descriptions and facts in this press material relate to Volvo Cars's international car range. Described features might be optional. Vehicle specifications may vary from one country to another and may be altered without prior notification.
Related Images
Feb 29, 2004 ID: 1870 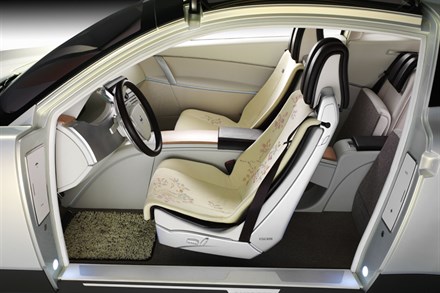 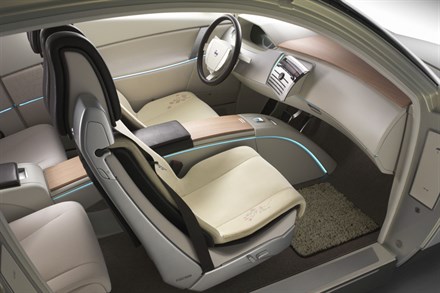 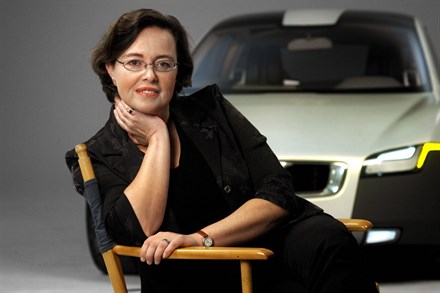 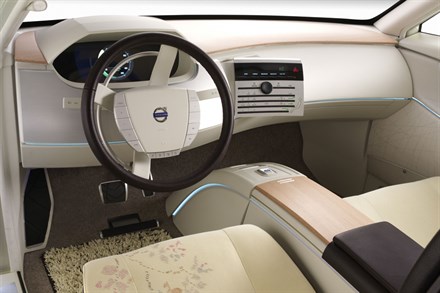