The new Volvo V50 sportswagon will make its debut in Canadian showrooms in the fall of 2004 and, like previous Volvo wagons, will combine generous portions of 'sport' and 'wagon' in a new model aimed specifically at younger buyers.

"The new 2005 Volvo V50 is a genuine premium car, with properties that appeal directly to young families on the move," said Paul Cummings, president and chief executive of Volvo Cars of Canada Ltd. "They are active people looking for a premium car that has an emphasis on modern design."

Cummings says the V50 delivers, with plenty of space and versatility in a sporty, compact package. "And, of course, being a Volvo, it offers outstanding safety features that are essential for young families."

Volvo Car Corporation's target is to sell 74,000 V50s a year worldwide, with 1,000 vehicles destined for Canada. Prices for the V50 range will be released closer to the cars' appearance in retailers' showrooms.

Like its four-door sedan sibling, the new Volvo S40, the V50 will be assembled at the recently upgraded Volvo Cars plant in Ghent, Belgium. At full capacity, the Ghent plant will be Volvo's largest manufacturing unit with annual production of 270,000 cars.

And, like the recently unveiled 2005 S40, the V50 follows the example set by the larger Volvo V70 in both its upgraded equipment level and its modern design, although Volvo design director Henrik Otto is quick to point out that the V50 has its own distinct persona.

The most distinctive exterior feature is a softer rear design and an extremely abrupt tail. To gain more cargo space, the five-door V50 is 46 mm longer than the new S40. The track and wheelbase have also been extended, virtually putting a wheel at each corner.

It's the interior, however, that distinguishes the new Volvo V50 as a modern design icon, including a new approach to interior design with a unique stand-alone, free-floating centre stack. An innovation in the auto industry, the design was developed specifically for the Volvo V50 and S40 following its recent preview in the Volvo VCC (Versatility Concept Car).

The ultra-slim centre stack elegantly links together the tunnel console with the instrument panel, which has a clean, uncluttered layout, with air vents and other details positioned as islands in an otherwise free area.

The controls in the new centre stack are ergonomically designed and functional, with several of them performing more than one task. The top half of the control panel operates the audio system while the lower half controls the climate system. The audio system can be specified with the Dolby Surround Pro Logic II, the same level of high-class car audio technology introduced in the Volvo XC90.

The V50 will be powered by a new generation of low-friction, five-cylinder engines that are considerably lighter and more compact than previous engines of the same displacement. Their design and light weight allowed Volvo engineers to enhance the sportswagon's performance, driveability, interior space and crash safety.

Volvo Cars of Canada will offer two versions of the new engine family. The standard engine is a 168-horsepower, 2.4-litre, normally-aspirated version producing 166 ft-lbs of torque. It will be mated to either a new 5-speed manual transmission or an optional 5-speed automatic with Geartronic.

The high-performance Volvo V50 T5 will be powered by a torrid 218 horsepower, turbocharged 2.5-litre engine putting out an impressive 236 ft-lbs of torque. The T5 will be offered with either a 6-speed manual transmission developed for the sporty Volvo S60 R and V70 R or a 5-speed automatic with Geartronic sequential shifting. For ultimate performance and versatility, the T5 can be ordered with electronically-controlled all-wheel drive.

The front body structure of the Volvo V50 is divided into several zones, each with a different role in the deformation process that absorbs forces in frontal crashes. The outer zones are responsible for most of the deformation. The closer the collision forces get to the passenger compartment, the less the materials deform. To give each zone the appropriate crumple properties, different grades of steel are used in different areas. The slimmer engines create greater space between the engine and passenger compartment. In a collision, the engine can be pushed no more than 150 mm rearwards before the crankshaft is stopped by a cross-member near the bulkhead.

The new Volvo V50 also shares the same type of interior safety systems as those found on the larger Volvo models, including WHIPS (Whiplash Protection System) and SIPS (Side Impact Protection System) with side-impact airbags and inflatable curtains, as well as dual-stage front air bags and three-point seatbelts with pre-tensioners. Because the Volvo V50 is 54 mm wider than its predecessor, the V40, added space is created for deformation in a side impact.

In addition, the body of the new Volvo V50 is 34 per cent stiffer than that of its predecessor, the V40, providing torsional rigidity that contributes to stable, predictable behaviour on the road. The suspension is independent all around, with struts at the front and a multi-link system at the rear. The rear suspension provides a degree of passive steering to counteract any tendency to skid.

Note to editors: Photos of the new Volvo V50 are available at www.volvocars-pr.ca.

Descriptions and facts in this press material relate to Volvo Cars's international car range. Described features might be optional. Vehicle specifications may vary from one country to another and may be altered without prior notification.
Related Images
Dec 04, 2003 ID: 1769 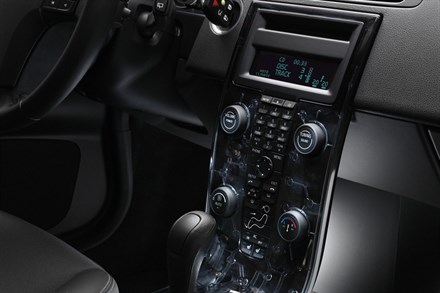 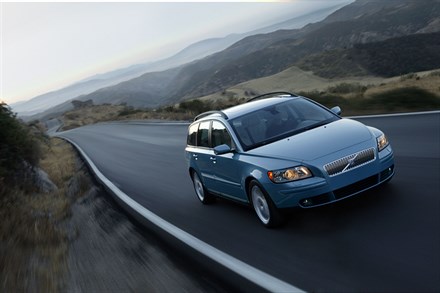