Richmond Hill, ON. December 2nd, 2015. Volvo Cars is re-entering the luxury sedan segment with the introduction of the all-new S90. The all-new S90 is the second vehicle, after the critically acclaimed XC90, in the new vehicle lineup offering an executive class sedan. Equipped with a host of new technologies ranging from cutting edge safety to cloud-based apps and services, the S90 is further proof of the Swedish brand’s continuing transformation.

“With the launch of the XC90 we made a clear statement of intent. We are now clearly and firmly in the game. With $11 USD billion of investment over the past five years we have not only reimagined what Volvo Cars can be – we are now delivering on our promise of a resurgent and relevant Volvo Cars brand,” said Håkan Samuelsson, President & CEO, Volvo Car Group.

The new Volvo S90 comes equipped with an advanced semi-autonomous drive feature, Pilot Assist. The system gives gentle steering inputs to keep the car properly aligned within lane markings up to motorway speeds of around 130 km/h and no longer needs to follow another car. Pilot Assist is another step towards full autonomous drive – a key innovation area for Volvo.

Like the XC90, the S90 offers one of the most luxuriously appointed interiors and connected infotainment systems in the sedan segment. The S90 will also be available equipped with the T8 Twin Engine plug-in hybrid powertrain.

“Our idea was to bring something entirely new to this rather conservative segment and deliver a visual expression that exudes leadership and confidence on the exterior. On the inside we have taken the S90 to the next level, delivering a high-end luxury experience that promises comfort and control,” said Thomas Ingenlath, Senior Vice President Design at Volvo Car Group.

The S90 also introduces a world first function to City Safety - large animal detection - a system capable of detecting large animals such as elk, horses or moose, night or day. The technology offers an intuitive warning and brake support to help avoid a collision. The S90 has also benefitted from Volvo Cars’ recent investment in a highly advanced chassis simulator.

Keywords:
Product News
Descriptions and facts in this press material relate to Volvo Cars's international car range. Described features might be optional. Vehicle specifications may vary from one country to another and may be altered without prior notification.
To view the full copyright information click here
Related Images
Dec 01, 2015 ID: 170073 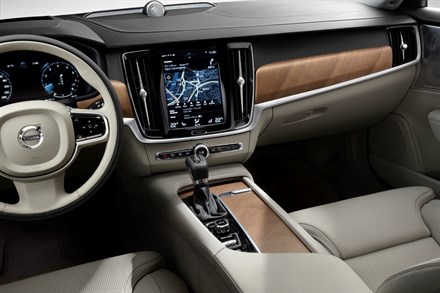 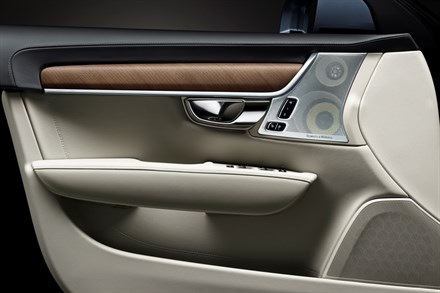 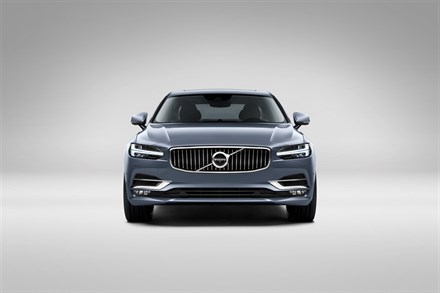