Volvo Cars’ safety expert Anders Axelson knows that brilliant ideas can pop up in the strangest of circumstances. A visit to Legoland with his twin daughters in 2007 inspired Anders to turn an amusement park ride into an efficient test method in Volvo Cars’ quest for better protection in run-off road crashes.

“Watching people being thrown in all directions during a ride in the ‘Robocoaster’, I suddenly realised that those rapid, random movements resembled the violent forces occupants in a run-off road crash are exposed to,” says Anders Axelson.

Run-off road crashes had been on Anders’ mind since 2006 when Volvo Cars intensified the development of technology to help protect car occupants in these common and complex scenarios.

Analysing films from a large number of these tests confirmed that being thrown out of the ideal, firmly strapped-in seat position correlates well with potential injury-causing mechanisms seen in real-world crashes.

Searching for a test method

“The engineers developed promising solutions to actively retract the occupants in order to keep them in position. But since running complete cars into the terrain is a time-consuming and expensive test method, we needed a quicker and cheaper solution to evaluate the ideas,” Anders Axelson recalls.

The stroke of genius conveniently came on a family trip to Legoland in Denmark. At the time, Anders’s twin girls were too small for the ‘Robocoaster’, but after watching other kids being shaken by the robot arm, he realised that the ride had potential beyond making kids scream with joy.

Back at the office, Anders started searching for a similar robot that could be programmed to mimic the exact movement patterns that Volvo Cars had recorded during the complete vehicle run-off road crash tests.

“The industrial robot manufacturer ABB had the technology and the knowledge to programme a machine designed for precision work to move a car seat around in a seemingly random pattern. It worked brilliantly,” says Anders Axelson.

A vehicle seat and restraint system is mounted on the multi-axial industrial robot. The robot, which is used together with a crash test dummy, can be programmed to simulate the occupant kinematics during crucial parts of run-off road scenarios.

During the development work of the all-new XC90 and upcoming cars based on the company’s new scalable architecture, Volvo Cars’ own ‘Robocoaster’ has been used to find the combination of safety belt geometry, rapid belt retraction and seat design that helps keep the occupant firmly in position in run-off road scenarios.

The result is a world-first run-off road protection package that includes rapid electrical safety belt retraction as well as unique ‘energy-absorbing’ functionality in the seat that cushions the vertical forces that occur in a ‘hard landing’ in the terrain.

“The most valuable result from the ‘Robocoaster’ tests is probably the insight into how well the safety belt retraction interacts with the enhanced side support in our new seat generation,” says Anders Axelson.

By the way, Anders Axelson never went on the ‘Robocoaster’ ride during that visit to Legoland. “No way. Violent rides like that make me sick,” he says with a smile.

Keywords:
Product News
Descriptions and facts in this press material relate to Volvo Cars's international car range. Described features might be optional. Vehicle specifications may vary from one country to another and may be altered without prior notification.
To view the full copyright information click here
Related Images
Dec 05, 2014 ID: 154752 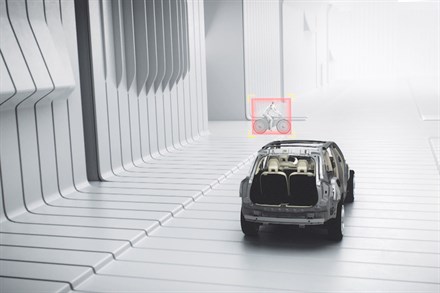