Toronto (May 14, 2008) - On May 13 in Göteborg, Sweden Volvo Car Corporation announced a group from Russia had been selected as the recipient of the top US$10,000 prize at the Volvo Adventure competition. The ‘Green Sail' team presented their project on the rescue and reviving of an endangered and environmentally-sensitive urban park in the Russian city of Nizhny Novgorod. Team members Arthur Erofyev, Darya Aleksandrova, Mary Ermylova, Nastya Horytonova, Julia Udina accepted the first prize in front of their international peers and judges from Volvo Cars and the United Nations.

The Green Sail team's project focused on a local Dubky Park, which has a unique ecosystem and biodiversity, including thousands of mature carbon-absorbing trees. Some of the 1,000 oak trees are more than 200 years old and are home to a wide variety of birds, animals and insects. After learning of plans to turn the area into a retail park and threaten the wildlife, the team decided to take action.

"We have campaigned for two years now to save Dubky Park, arguing our case with a well-planned project of research, analysis and action and winning the 2008 Volvo Adventure is recognition that our efforts have been worth all the effort," said 12-year-old Artur Erofeev. His 15-year-old team-mate Anastasia Kharitonova added, "Thank you to the people of our city of Nizhny Novgorod and also to the Volvo Adventure for sharing, recognizing and rewarding our passion for our park, locally, nationally and internationally."

Runners-up in the Volvo Adventure competition and recipients of the US$6,000 second prize was the ‘Green Action' team from Macedonia for its project on saving the nation's endangered population of water buffalo. The third podium place and US$4,000 was taken by Volvo Adventure debutants, the Junior Ecoguards of Comoros, the students from the tiny Indian Ocean Island are working to save the Hawksbill Turtle from extinction.

The Energetic Energy Education project was a four-stage plan to reduce the school's energy consumption. The purchase and integration of a wind turbine and solar cells into the school's power grid have been carried out. What remains for the group is the installation of a green roof to reduce heating costs and the construction of a greenhouse to grow food will be the new focus for the group. Vegetables will be provided to school's cafeteria and some will be donated to a nearby mission for the homeless. The team also plans to use biodegradable waste as compost to help replenish the soil in the greenhouse.

Olle Axelson, Vice President, Public Affairs at Volvo Cars, who presented the first, second and third place prizes at a glittering gala award ceremony commented, "Any of these projects could have won the 2008 Volvo Adventure. The jury has executed a very difficult job with great judgement, integrity and distinction and I would thank our partners UNEP [United Nations Environment Programme] and WWF [World Wildlife Fund for Nature] for their support as well as congratulating these highly-motivated young environmentalists all over the world for taking part. "

Volvo Adventure is an environmental problem-solving program for adolescents created by Volvo Car Corporation in partnership with the United Nations. The Volvo Adventure encourages 13 to 16 year olds to plan and execute environmental protection efforts in their local community. The projects are submitted online and one team from each participating country is awarded an all expenses paid trip to Sweden to present their project to a panel of judges.

Volvo Cars of Canada Corp. is part of the Volvo Car Corporation of Göteborg, Sweden. The company provides marketing, sales, parts, service, technology and training support to the 42 Volvo automobile retailers across the country. The company's product range includes the stylish and sporty C30, the elegant C70 hardtop convertible, the compact S40 sedan, the S60 sport sedan, the S80 flagship sedan, the versatile V50 wagon and the award-winning XC90 sport utility vehicle. For 2008, the company is introducing two all-new models: the redesigned V70 wagon and the rugged and comfortable XC70.

Keywords:
Environment, Special Interests
Descriptions and facts in this press material relate to Volvo Cars's international car range. Described features might be optional. Vehicle specifications may vary from one country to another and may be altered without prior notification.
Related Images
May 14, 2008 ID: 15411 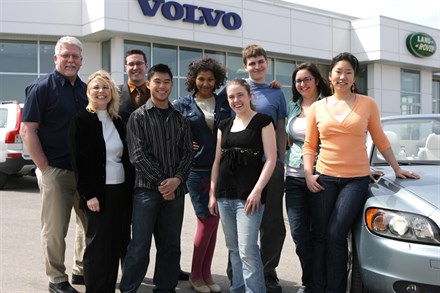 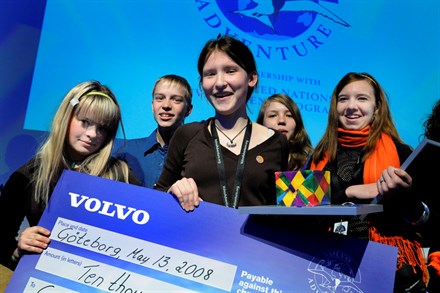