In a Volvo vehicle, safety is fully integrated into its development. To the engineers and designers at Volvo Car Corporation, it is the interplay between its design and various safety technologies that determines how safe a vehicle is, not the amount of individual components and features. The aim is to design a vehicle that is safe in a global and holistic perspective, with different size of occupants and in different traffic environments. This holistic view is, and always has been, a cornerstone of Volvo Cars' safety philosophy.

Preventive safety is a very efficient way to reduce the number of incidents in the traffic environment and is therefore an important area of Volvo Cars' research and development. Preventive safety includes the safety technologies that help the Volvo driver to avoid an incident in the first place. Examples of such preventative safety technologies are Distance Alert and Driver Alert Control. Others support the driver when a collision is about to occur in order to help the driver to avoid or potentially reduce the severity of the collsion. For example, Collision Warning with Autobrake and Dynamic Stability and Traction Control (DSTC). Real world safety is a key expression in Volvo Cars' safety philosophy and the  technologies within the preventive safety area can create significant improvements.

PROTECTIVE SAFETY
If a collision does occur, a Volvo vehicle is also designed to help protect the occupants. The design of the vehicle and its safety technologies -- such as the safety belt and pretensioners in combination with airbags, inflatable curtains -- help to make Volvo vehicles among the world's safest. Another aim for Volvo's protective safety development is to help protect unprotected road users such as motorcyclists and pedestrians.

CHILD SAFETY
Volvo Cars was the first car manufacturer to develop its own child restraint in the 1970's. The company has developed integrated booster cushions and rear-facing child restraints and was among the first to develop a virtual pregnant test dummy.

Volvo Cars has also developed the world's first dual-stage integrated booster cushion (currently available on the V70, XC70 and the XC60 in 2009).  The new booster cushion allows the seat belt to better adapt to the child's stature and allow them to see out the window.

The Personal Car Communicator (PCC), is an advanced pocket-sized control centre which provides information which in some circumstances may be of interest to the Volvo vehicle owner for their personal security. A simple push of a button can, within a few seconds, tell the vehicle owner if the vehicle is locked or unlocked, if the alarm has been triggered or if the alarm has been triggered and if a human heartbeat has been detected inside the vehicle.

VOLVO CARS SAFETY CENTRE
This unique centre in Gothenburg opened in 2000 and is the most advanced facility of its kind. The advanced laboratory helps the researchers to simulate real-life traffic conditions. The crash laboratory features both a fixed test track and a moving test track, from 0 to 90 degrees. Comprehensive full-scale tests are performed on vehicle-to-vehicle tests, frontal impacts, offset tests, bus or truck as well as other objects in the traffic environment at different speed with different size of the crash test dummies in different crash angles to verify occupant safety according to the real traffic environment.

The Volvo Cars Safety Centre represents a true breakthrough in safety research. The Ford Motor Company and the Volvo Group also use the facility.

2004 BLIS, system for information about the blind spot offset rear

Keywords:
Safety
Descriptions and facts in this press material relate to Volvo Cars's international car range. Described features might be optional. Vehicle specifications may vary from one country to another and may be altered without prior notification.
Related Images
Sep 10, 2003 ID: 7983 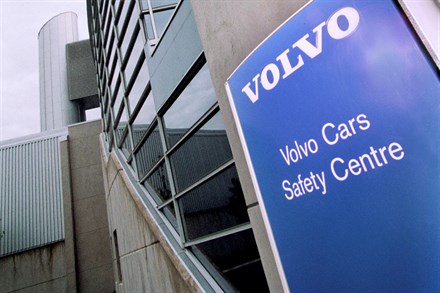 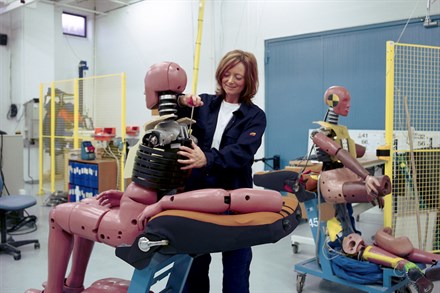