TORONTO (July 5, 2007) - Volvo Cars of Canada Corp. will begin selling the all-new, third generation 2008 XC70 at Volvo retailers in the fall of 2007.  Prices will be announced closer to the on-sale date.

In Canada, the first XC model appeared in 1996 and launched a new product range of off-road capable Volvo vehicles equipped with all-wheel drive. The original XC vehicle prospered in its role in the Volvo line-up, and, over two generations, worldwide sales grew from 15,000 units ten years ago to nearly 35,000 units last year.  The XC-range today includes the XC70, XC90 and will add the XC60 in 2009.

The all-new XC70 will be powered by the company's proven 3.2-litre, in-line 6-cylinder engine that delivers 235-horsepower and 236 lb.-ft. of torque.  The engine is paired with a 6-speed automatic transmission and Volvo's Electronically-controlled All-wheel Drive system with Instant Traction.  Off-road aids, such as a new Hill Descent Control (HDC) manage the car's engine and braking systems to maintain a maximum speed of 10 km/h when descending a steep hill.

The all-new XC70 sports a more aggressive style than its predecessor, intended to give the vehicle more road presence.  Designers also wrestled with the task of providing the vehicle with a more refined appearance without losing any of its off-road functionality.

"The dark-coloured plastic panels at the bottom are less obvious than on the current model," says Steve Mattin, Design Director at Volvo Car Corporation. "But as with exclusive outdoor clothing, the protection is placed exactly where it needs to be to withstand the rough stuff."

At the front, the characteristic dark nose of the current XC70 has been replaced with a new, painted nose. The headlamps and grille have grown and now have the same trapezoidal shape that was first seen on the XC60 Concept at the North American International Auto Show in Detroit in January, 2007. In order to retain the rugged-yet-refined stance, the larger air intakes at the corners of the front bumper feature larger, dark plastic panels and draw attention to the vehicle's wide stance.

The vehicle's profile reveals a body that communicates the promise of a spacious interior and styling treatments such as chrome accents atop the side body cladding and a roof rail integrated into the A-pillar moulding.  The pronounced wheel housings not only draw attention to the wheels, but support the ruggedly capable message.

The rear of the car features large tail lamps and a large hexagonal glass tailgate to improve rearward visibility -- similar to the tailgate found on the Volvo C30. As well, the Volvo name features has larger lettering and wider spacing, similar to what was found on the XC60 Concept.

"The shape of the outside is now more dynamic without compromising the car's practical properties," says Mattin. "With the help of the intelligent overlapping tailgate, which takes the tail lamps up with it when it is opened, the space inside the car is larger than before and easy to load."

As with all Volvo vehicles, safety features abound in the all-new XC70.

"When we developed the all-new Volvo XC70 the goal, as for the all-new Volvo V70, was that it should be the safest car in its segment," says Ingrid Skogsmo, Director of the Volvo Car Corporation Safety Centre. "The XC70 model shares the same sophisticated network of interacting safety systems as the Volvo S80. The patented body structure absorbs energy in a highly efficient way and the interior safety system includes the latest generation of side airbags and whiplash protection."

The XC70, like the V70, will also feature a new, height-adjustable integrated child booster cushion installed in both outer rear seats.  This new booster cushion can be set at two heights, allowing children of different sizes to see out the windows and to ensure the child is in the best position to benefit from their seat belt in the event of a collision.

The XC70's Side Impact Protection System (SIPS) has been improved to help better protect occupants - with the adoption of four kinds of steel to absorb and distribute collision energy around the passenger cabin - by encouraging the XC70 to slide away from the colliding vehicle in T-bone style impacts. To protect the passengers, the Inflatable Curtain (IC) air bag has been extended by 60 mm and new, dual-chamber side impact air bags are mounted in the front seats to offer better protection for the hips and chest.

The front collision management structure - designed from a Volvo Cars patent - similarly employs four different kinds of steel to distribute collision energy throughout the body structure and away from the passenger cabin. With a taller stance, the all-new XC70 also features a front cross-member designed to interact more effectively with the lower front bumpers found in other cars on the road.

Rear impact protection comes in the form of Volvo's patented Whiplash Protection System (WHIPS) in the front seats.  The seats slide back and tilt when the XC70 is hit from behind to help reduce the g-forces passengers experience and reduce the likelihood of soft tissue injuries.

Yet, while protective safety continues to play an ever important role in Volvo Cars' research, preventative safety has grown in focus.  With good reason.

"The best way to protect the car's occupants is to avoid accidents," says Ingrid Skogsmo. "That's why we've developed a number of advanced driving and support systems that interact to assist the driver in difficult situations, yet without taking over the driving itself or taking over responsibility for safe progress. The task is to assist the driver to make the right decisions, by alerting him or her and in various ways indicating how best to get out of the situation."

Like the S80 and all-new V70, the all-new XC70 can be equipped with features such as Collision Warning with Brake Support to warn the driver if the Volvo is approaching the vehicle ahead at a rate where a collision seems likely. This system will also pre-charge the brakes in preparation for an emergency stop.  Technologies such as Adaptive Headlights respond to the car's speed and steering wheel input to illuminate more of the road in corners while the Blind Spot Information System (BLIS) utilizes cameras in the side mirrors to warn the driver if a vehicle has entered the driver's blind spot.

The XC70 will also be available with the Volvo Personal Car Communicator (PCC).  Within 100 metres, the PCC key fob can communicate with the Volvo car to determine if the alarm has gone off and if a heartbeat is detected inside the car.

Volvo Cars of Canada Corp. is part of the Volvo Car Corporation of Göteborg, Sweden.  The company provides marketing, sales, parts, service, technology and training support to the 43 Volvo automobile retailers across the country.  The company's product range includes the stylish and sporty C30, the elegant C70 hardtop convertible, the compact S40 sedan, the S60 sport sedan, the S80 flagship sedan, the versatile V50 wagon and the award-winning XC90 sport utility vehicle. For 2008, the company is introducing two new models: the redesigned V70 wagon and the capable and comfortable XC70.

Keywords:
XC70 (2007), 2008
Descriptions and facts in this press material relate to Volvo Cars's international car range. Described features might be optional. Vehicle specifications may vary from one country to another and may be altered without prior notification.
Related Releases 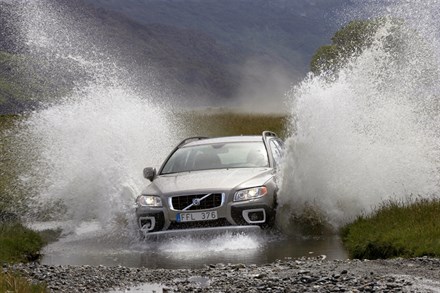