The world's first diesel plug-in hybrid is Volvo Car Group's most technically advanced model ever - an electric car, hybrid car and high-performance car all rolled into one. Following the successful 2012 introduction in its high-specification ‘Pure Limited' guise, the ingenious Volvo V60 Plug-in Hybrid is now available with a full range of colours and specifications, including most of the design and technology upgrades of the standard V60, while retaining its unique and class-leading 48 g/km emissions.

The design team has increased the road presence of the V60 Plug-in Hybrid by emphasising its horizontal lines, which visually connects the car directly to the road. The silhouette is a visual reminder that this is no ordinary estate - it's a wagon with a coupé-like appearance.

Scandinavian design is exemplified by beautiful, simple shapes and surfaces with any unnecessary clutter removed.  This is evident in the new interior and exterior. Inside, the attention to detail, the authentic materials - such as wood and leather - and the easy-to-use controls contribute to the in-command driving experience. There are upgrades such as new upholstery colours, new wood inlays, a new headliner, and light controls.

To give drivers in cold climate extra comfort, three-spoke steering wheels can now be specified with electric heating.

Supportive yet comfortable seats that ensure a fresh and relaxed arrival after the longest of journeys have been one of Volvo strengths for decades. The buyer of the V60 Plug-in Hybrid can now specify a new sport seat that retains this traditional comfort and makes a perfect addition to the in-command feel of a true driver's car. It has great hugging side support all the way from the thighs to the shoulders, so the seat keeps the driver firmly in position when cornering fast.

There are several other examples of the attention to detail. The previously visible washer nozzles have been relocated out of sight under the bonnet.

The rear axle is powered by an electric motor producing 68 hp and 200 Nm. The electric motor is supplied with power from an 11.2 kWh lithium-ion battery pack installed under the floor of the load compartment.

Pressing the AWD button activates the electrical four-wheel drive. Instead of the mechanical power transfer of conventional four-wheel drive, the central control unit distributes power between the diesel-driven front wheels and the electrically driven rear axle. The electric four-wheel drive system has been designed as a traction system to provide better grip when starting and when driving on slippery roads, for instance in snow or mud.

A two-stage braking system is yet another smart feature of the Volvo Plug-in Hybrid. When the driver presses the brake pedal, the system starts braking the rear axle's electric motor. The mechanical brakes are activated only when the situation requires more braking power than the rear axle can provide. The braking energy can be used to recharge the battery.

The Digital Display theme colours are also echoed in the all-new connected infotainment system, which is introduced in the S60, V60 and XC60 during the second half of 2013. It features a refreshed HMI with a number of innovative functions, such as:

The Adaptive Digital Display, which debuted in the all-new V40, uses an active TFT (Thin Film Transistor) crystal display to bring the driver personalised information. There are three themes to choose from: Elegance, Eco and Performance.

IntelliSafe, Volvo's blanket name for all active safety systems, is an important part of the driver-centric approach in the V60 Plug-in Hybrid.

The V60 Plug-in Hybrid features an upgraded City Safety system. This system is active at speeds up to 50 km/h. The car automatically brakes if the driver fails to react in time when the vehicle in front slows down or stops - or if the car is approaching a stationary vehicle too fast.

Another innovative option for driving in the dark is the low-speed Cornering Light feature. As an extension of the current Active Bending Light system, it lights up the area the driver is steering towards for safer manoeuvring.

The V60 Plug-in Hybrid offers the enhanced Blind Sport Information System (BLIS), which is radar-based. The technology can now also monitor and alert the driver to rapidly approaching vehicles up to 70 m behind the car. Of course it still informs the driver about vehicles in the blind spots on both sides.

Cross Traffic Alert - covering your back

Cross Traffic Alert uses the radar sensors at the rear end of the car to alert the driver to crossing traffic from the sides when reversing out of a parking space. This is especially helpful in tight and crowded areas where the side view might be limited due to infrastructure, vegetation or other parked cars. 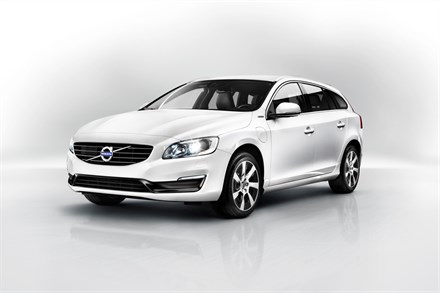 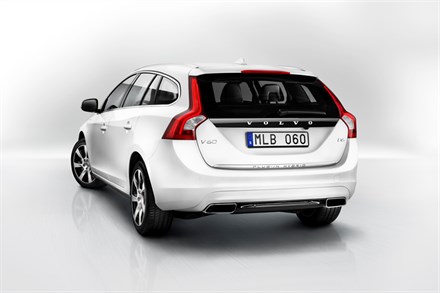