On August 8, the four millionth car was built at Volvo Cars Ghent. It was a Volvo V50, a sporty R Design version, ordered by VDL, a customer from Breda in Netherlands.

2008 seems to be a jubilee year for the production of Volvo Cars. On February 20, Volvo Cars built its 15 millionth car, a Volvo C70, in the Uddevalla plant (a joint venture company with Pininfarina, Pininfarina Sverige AB). Volvo Cars started building cars in 1927 in Göteborg.
On June 16, the Volvo Cars Torslanda plant in Göteborg assembled its 6 millionth car. The factory opened in 1964.

In a few weeks Volvo will start assembly of the XC60 in Ghent. This new model is a crossover with which Volvo Cars enters a new and growing segment.

*Today is not V70 built in Ghent

In 1961 the body-building plant was ready and was able to deliver bodies for the Amazon (Volvo P120). In 1962 the paintshop was commissioned. On April 24, 1964, the entire facility was inaugurated, with the assembly plant now also fully operational. In full two-shift operation, there was sufficient capacity to produce about 200,000 cars a year, which was remarkable bearing in mind the annual production volumes of about 130,000 cars.

1964 was the year when the modern Volvo Car Corporation was born with the inauguration of the new Torslanda factory. Until then, the company's operations had been relatively modest.

Ever since, the factories in Torslanda and Ghent have developed into the main production plants of the Volvo Car Corporation. The assembly plant in Ghent was extended in 1972 with a body assembly facility and paintshop. The factory's capacity has been gradually expanded over the years and the peak year was 2005, when 258,000 cars were produced there.

Earlier this year, Volvo Cars built its 15 millionth car. It was a Volvo C70 which was produced at the factory (Pininfarina Sverige AB) in Uddevalla, north of Göteborg, and the car was handed over to a pleasantly surprised customer in the USA.

The 6 millionth car to leave the Torslanda factory in June this year was a V70 Flexifuel (E85). 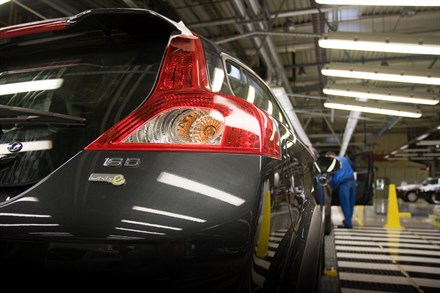