DETROIT, MI. - January 10, 2002 - Volvo Car Corporation announces that the name renowned for safety - Volvo - has been awarded the 2002 Concept Car of the Year for its Safety Concept Car (SCC). The SCC was selected from among dozens of leading concept styles and vehicles unveiled during the past year at auto shows around the world.

"At Volvo, safety is a core value. It is therefore gratifying to receive this prestigious recognition, because the SCC points the way to a new dimension in research and development into car safety," says Hans-Olov Olsson, President and CEO of Volvo Car Corporation. "The concept not only provides a glimpse of where we're headed, but also shows that safety can be packaged in an exciting design," he said. The vehicle's night vision technology was the basis for the system appearing in the company's new XC90, which will soon go into production.

The main theme of the Volvo Safety Concept Car (SCC) is "superior vision." The car also employs a variety of technologies that enhance personal security, improve passive safety systems, and provide evidence that Volvo Cars is at the very leading edge in the development of technology for safer driving.

A distinguished panel of judges participated in the selection: Akira Fujimoto of Car Styling Magazine; Professor Ken Greenley of the Royal College of Art; Gordon Murray of McLaren Cars Ltd.; Chuck Jordan, retired GM design chief; and, Chris Wright, correspondent of Automotive News Europe. "All the vehicles featured are the wave of the future," said Peter Brown, Automotive News executive editor and associate publisher. "The brilliant designers and engineers who see new possibilities for the future are just awe-inspiring," he said.

The award was presented at the AutoWeek Design Forum held at the Cobo Conference/Exhibition Center, in concert with the North American International Auto Show currently underway in Detroit.

For Photos and Editorial Information visit the Volvo Media Website:

FEATURES OF THE SCC:

The forward-thinking Volvo Safety Concept Car is built for the eye. Not merely in terms of aesthetic appearances and lines pleasing to the eye, but rather because the car has been designed around the driver's eye to ensure better vision and visibility.

When the driver gets into the seat, a sensor identifies the location of his or her eye. The seat then automatically adjusts to suit the position of the eye so that the driver gains the best possible field of vision. Once this is done, the floor, pedals, steering wheel and center console including the gear lever all move to ensure that all the controls are within convenient reach.

The driver thus enjoys the best overview over what is happening both outside the car and in the instrument panel.

The Volvo SCC is the result of close cooperation between Volvo Cars (appointed as the Ford Group's Center of Excellence) and the parent company, the Ford Motor Company. The car, which was designed at the Volvo Monitoring and Concept Center in California, displays advances in several research and development projects in the fields of safety and security. It clearly highlights the spearhead competence and the resources that the company has at its command.

The Volvo SCC has a number of additional functions that improve visibility:

The driver can see through the windscreen's supporting pillars - the A-posts - owing to a metal box construction combined with see-through Plexiglas. The B-posts - the pillars between the front and rear doors - curve inwards following the contours of the seat frame to offer an unobstructed field of vision to the offset rear.

In addition, rearward-facing cameras integrated into the door mirrors can show the driver what is in the blind spot.

An infrared light enhancer boosts nighttime vision beyond the reach of the headlights.

A forward-facing camera monitors the position of the car on the road and alerts the driver if there is any tendency to veer off course.

In addition, the Volvo SCC features a number of exciting features in the areas of active driving safety, crash protection and personal security.

Together with the car's B-posts, the front seat frames form a safety cage that is at least as effective in roll-over accidents and side-impact collisions as conventional B-posts are.

The car has two different types of 4-point safety belt: the 'X4 Criss Cross Belt' and a conventional 3-point belt that is supplemented with an additional diagonal chest belt. This V4 Center Buckle Belt is a new 4-point safety harness that has a centrally positioned buckle and shoulder straps that form a "V" across the chest.

The rear seat has two electrically adjustable seat cushions whose height can be simply altered to give children the most comfortable and the safest seating position, irrespective of their height.

The remote control unit has been developed into the Volvo Personal Communicator (VPC), and it has a number of new features:

The driver only has to grasp the door handle to unlock the door - and the car can be started without a key.

The system can even be pre-programmed with a number of destinations so that the navigation instrument is preset at the same time as the driver unlocks the door.

If the driver is more than 100 yards from the car, the VPC can still transmit this information - via a cell phone. It is also possible to transfer information from a PC or hand-held computer. 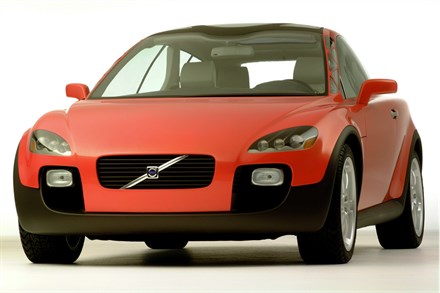