Volvo-sponsored team is hopeful of completing its 2,300-mile Antarctic odyssey

Rockleigh, N.J. -- Feb. 5 -- American polar explorer, Ann Bancroft and Norway's Antarctic veteran, Liv Arnesen, both former teachers and genuine "survivors" are close to their goal of becoming the first women to ski across the forbidding Antarctic continent. Relying on nature and their own stamina and bravery, the explorers have already skied and been pulled by ski-sails across 1,600 miles of treacherous ice and snow. The Volvo-sponsored team is hopeful of completing its 2,300-mile Antarctic odyssey later this month.

Struggling against sub-zero freezing temperatures, high winds and the physical demands required to pull individual 250 lb. equipment sleds are but part of their daily challenge. The team is encouraged to keep in touch with the world, and the growing number of expedition fans via the Internet. When the weather cooperates, satellite communications enable Liv and Ann to communicate with an international following of schoolchildren, well-wishers and media. The expedition, is now well beyond the South Pole halfway-point and approximately 550 miles from completion at McMurdo station.

When completed, the Bancroft Arnesen Expedition will mark the first successful ski-crossing of the ice continent by women and will be the longest known ski trek by women overall. "Volvo believes in the human spirit and in programs that seek to empower human effort and achievement. The Bancroft Arnesen expedition makes an important real-world statement. Volvo is very proud of the team and its many accomplishments," said Mark LaNeve, President and CEO of Volvo Cars of North America.

To further convey its support, Volvo engineers will coordinate a live phone call from Bancroft and Arnesen in Antarctica, somewhere on the Ross Ice Shelf, near the Shakelton Glacier, to a press conference held during the Chicago Auto Show.

The Volvo press conference is scheduled for February 8 at Chicago's McCormick Center. The Bancroft Arneson call is expected to begin at approximately 2:30 PM.

"We thought it appropriate for the core automotive press to understand why Volvo decided to become part of this incredible human achievement. Weather and technology allowing, the Expedition's call will come through during our press conference. We trust their message will serve to remind those listening of what the human spirit is truly capable of achieving...and not just on a made-for-TV adventure. These courageous women are more than survivors, they epitomize the meaning of 'Volvo for Life'", added Mark LaNeve.

The Bancroft Arnesen Expedition plans to reach McMurdo Station in late February. The team's progress may be followed by visiting its website www.yourexpedition.com.

Keywords:
Special Interests
Descriptions and facts in this press material relate to Volvo Cars' international car range. Described features might be optional. Vehicle specifications may vary from one country to another and may be altered without prior notification.
Related Releases 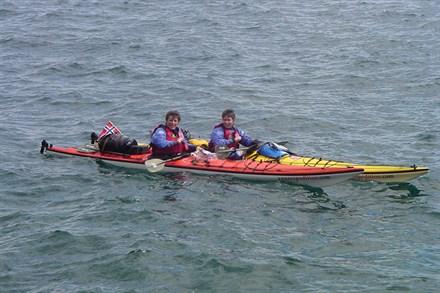