In its crash safety laboratory, Volvo Cars has test capabilities far superior to those of its competitors. With the help of a moving test track, carried on air cushions, crashes between two cars moving towards each other can be carried out from all imaginable angles and speeds.

The crash laboratory is the most striking part of the Volvo Cars Safety Center. The two tracks - 168 yards and 118 yards in length respectively - meet in a cathedral-like hall with 48 feet to the ceiling. The ability to combine two tracks - one of which can be moved - makes the laboratory at the Volvo Cars Safety Center unique in the automotive world.

The movable track can be turned by up to 90 degrees, allowing car-to-car impacts from full frontal to right-angled from the side. "We can quite simply move the reality of the roads into our crash laboratory," says Stefan Nilsson, Director, Volvo Cars Safety Center.

The track weighs over 600 tons and is moved with the help of air-cushion technology. A 0.1 mm layer of air is created between the concrete travel surfaces and the twenty rubber air cushions that the crash track rests on. Six specially built air-cushion trucks then move the track. The cars to be tested are accelerated with the help of two electric motors per track, connected with 18 mm steel cables via a drum.

The motors are of the same type as are used in mine lifts. The two most powerful ones develop 1800 kW (2450 hp) each during acceleration. Two laser instruments measure the position of the cars with millimeter precision and can thereby calculate their exact positions at any given instant. This information is transferred to the electric motors that ensure that the cars collide at exactly the right position and exactly the right speed.

A couple of meters before the point of impact, the cars run freely. For barrier tests, only the fixed track is used. The 850-ton block is moved into place with the help of the same air-cushion technology as is used for the movable test track.

The fixed track is also used for the rolling test, which involves pulling the car in the opposite direction out onto a track where it performs several roll-overs. Correspondingly, the car can be driven into a mountainside or a ditch if it is driven in the 'wrong direction' on the movable track.

Studying the sequence of events on film is one important part of the evaluation of a crash test. Each test is filmed with a number of different high-speed cameras for film and video, which can take as many as 3000 frames per second. Volvo Cars' crash analysts can then compare the film with the data from the sensors in the cars.

Amongst other things, the films allow measurement of deformation on the cars. There are thirty high-speed cameras, which can be used at the same time in the new crash laboratory. They are placed above, alongside or beneath the impact site. With the help of 32 daylight photo lamps of 8,000 W each, it is possible to use daylight film.

In order to film a test from below there are two photo pits, six meters deep and covered with seven layers of laminated, hardened special glass. These pits contain both cameras and lighting equipment. The new crash laboratory also includes facilities for preparation of test cars, two observation decks and office space.

Keywords:
Safety
Descriptions and facts in this press material relate to Volvo Cars' international car range. Described features might be optional. Vehicle specifications may vary from one country to another and may be altered without prior notification.
Related Images
Sep 18, 2003 ID: 189 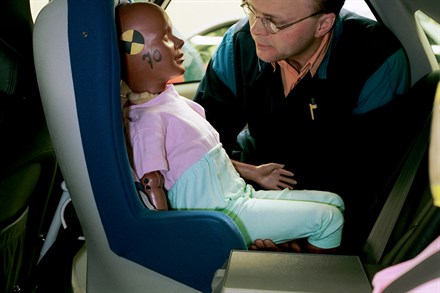 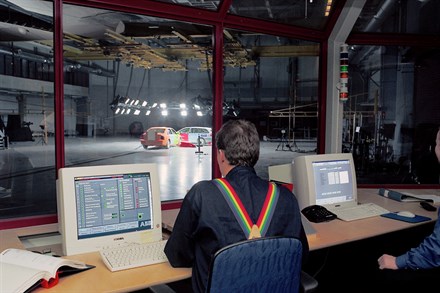 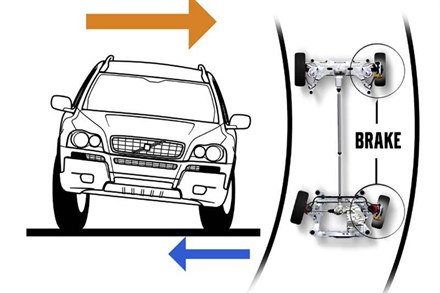