75 years young - and life has never been better

The sprit of Volvo is characterized by life.

And now, 75 years young, Volvo Car Corporation is rolling into a future where seven little words are all it will take to describe the automotive world:

"There are cars. And there is Volvo".

But this is not actually anything new.

Volvo has always had a strong Scandinavian identity, which by definition has made the company different and unique over the years.

The actual beginning is an excellent example.

On the evening of 25 July 1924, Assar Gabrielsson and Gustaf Larson ran into one another at the Sturehof Restaurant in Stockholm.

The two Swedish car enthusiasts ordered a huge plate of red crayfish - and a few hours later the company that would be known to the world as Volvo was born.

In the Swedish calendar, Jakob has his name day on 25 July - the day of the crayfish party - and "Jakob" also became the nickname of the first car model.

Powered by a two-litre engine developing 28 hp, it rolled out of the factory on 14 April 1927.

Sales manager Hilding Johanson drove it into the open yard and a handful of onlookers cheered. The risk of a speeding ticket was limited in those days. Top speed was claimed to be 90 km/h - but that was regarded as somewhat optimistic.

It was also daring for a Nordic company to enter the market with a convertible, so the demand for "Jakob" was limited. Only 300 cars were sold during the few years in which the model was built.

The safety image was born with a bang

The founding fathers spoke about safety at a very early stage and the first collision ever involving a Volvo occurred even before the first car was sold.

In 1926, on the road from Stockholm to Gothenburg, one of the nine "Jakob" prototypes collided head-on with an American car.

The import became a wreck, while the Volvo emerged with just a few scratches.

A safety image was born.

Modest exports in the 20's

It wasn't until 1955 that Volvos were exported to the United States. Competing with the giant American brands was considered to be a daring adventure. Or, as a wise Swede put it, "Like selling refrigerators at the North Pole".

In spite of this, the PV 444 came to the American shores. It became a hit and the US soon grew to be the largest market for Volvo cars.

Close to being American - in the late 20's

Few people know that Volvo was close to becoming an American company back in the late 20's after a tough start.

The legendary car manufacturer Charles Nash took the boat to Sweden to close the deal, but Assar Gabrielsson himself and the ball bearing company SKF made a joint effort and managed to keep the company Swedish - just a few hours before the American guests arrived at the Port of Gothenburg.

In September of the same year, Volvo made a profit for the first time - and the company is still going strong.

What about Nash? Well, that's another story...

During the thirties, inspiration came mainly from the U.S. Skilled Swedish engineers, who had worked for American car manufacturers in Detroit, returned to Sweden and Volvo. They injected the company with technological know-how and design influences.

The PV36 was launched in 1935. The beautiful "Carioca" had a new, bold rounded shape and innovative technology such as individual wheel suspension. The Carioca is still one of the real Volvo classics.

The PV800 became extremely popular among taxi drivers in the 40's. It was very large and comfortable. The PV800 was often used to rush pregnant women to hospital. Several middle-aged Swedes of today were born in this Volvo.

PV444 - the favorite of families and racing drivers

The dawn of Volvo design tradition, as we know it, came with the PV444. This was a self-confident car, smaller than the U.S. models, but larger and more dynamic than the European small cars of the time.

As mentioned before, it made a major breakthrough for Volvo in the U.S. The PV 444 was roomy on the inside and had enough horsepower to be known as the "family sports car".

Very soon, it also became the favorite car of racing drivers. In those days, competitors sometimes refused to come to the start if a Volvo had entered the race. It was considered to be a waste of time and gas...

Italian inspiration in the 50's

In the 50's, the Italians led the design world.

Volvo Car Corporation appointed a chief designer for the first time. Jan Wilsgaard blended Italian inspiration with Swedish functionality in the PV120, the Amazon, which was born in 1956.

The PV 120 emphasized the typical design features that have been part of Volvos ever since: the V-shaped hood, a distinctive shoulder line and the vertical grille, proud to be Volvo.

Whereas the wagon version of the PV444, the "Duett", was a totally functional means of transport, the Amazon became the first in a long line of Volvo wagons that blended prestige and practicality.

Synonymous with safety in the 50's

The PV444 had been equipped with innovations like the laminated windscreen and the safety cage back in the 40's, but the 50's were the decade in which Volvo very definitely became synonymous with safety.

In 1959, Volvo changed the automotive world for ever by introducing the three-point safety belt, invented in-house by Nils Bohlin.

The three-point safety belt is one of the most important life-saving innovations in human history - and it is still the basis of safety in every modern car.

Volvo received its first safety award in 1962. It was to be followed by many more...

With this life-saving image in mind, what could be more natural than the next Volvo being driven by a "Saint"?

The P1800 was introduced in 1959. It was sporty, dynamic and elegant enough to be driven by Roger Moore in the British TV series The Saint. A choice that probably didn't go down very well with the British car industry...

And, being Volvo, the functional Swedes couldn't stop themselves making a wagon version of this beautiful sports car. The tailgate of the P1800 ES has made a comeback several times since then: in the Volvo V40 and recently in the Volvo Safety Concept Car.

The Volvo 140, introduced in 1966, was the first Volvo in which the sedan and wagon versions were developed side by side...

With the Volvo 140, followed by the 240, Volvo introduced a timeless design that attracted customers throughout the world for almost thirty years. This was due to the simple, clean lines, which took the virtue of functionality to new heights.

The most functional of them all was, of course, the Volvo 245, the mother of all Volvo wagons.

These two models also represent major advances in the fields of active and passive safety - as well as in the field of environmental care.

The catalytic converter with the Lambda sensor was introduced in the U.S. in 1976.

It represented a major breakthrough. In actual fact, the emissions from the first cars were so low that the test equipment had to be checked very carefully. The U.S. test team thought that it was broken...

The 240 became the "Cleanest Car Sold in America" - and today the catalytic converter is the basis of emission control in every modern car.

Success in a boxy package

At a time when the automotive world was turning back to rounded shapes, Volvo Car Corporation once again chose its own path in the 80's.

The bold design of the Volvo 760 and Volvo 740 received its fair share of attention, but Volvo was confident that the new 700 Series would become a hit. They were right. Soon, Volvo's sales figures reached an all-time high.

The carrying capacity of the wagon version was a direct result of the design; where other manufacturers were cutting corners, the boxy shape of the Volvo created superior loading space.

The Volvo 850 was Volvo Car Corporation's largest industrial project ever.

It heralded the start of a new era. Safety, reliability, functionality and environmental concern, all the world-famous Volvo virtues, were wrapped up in a dynamic package that would gradually change the image of Volvo during the rest of the nineties.

The Volvo 850 has won more awards than any other Volvo car, both for its technology and safety level and for its design. The Volvo 850 sportswagon was voted the "world's most beautiful wagon" in Italy, where good design is a way of life.

The distinctive rear end of the Volvo 855 has been much copied, but, just like copies of other high-quality brands, there is nothing like the feeling of owning the original...

The new Volvo S60 and its siblings on the same platform, the Volvo S80, Volvo V70, the Volvo Cross Country and now the XC90, are all excellent examples of the way the designers and engineers work hand in hand at a modern car company.

The basic architecture with its space-efficient, transverse, in-line engine, which was introduced in the Volvo 850, has given every one of the new Volvos its own advantages:

Extra legroom in the rear seat of the S80, more luggage space in the V70, the dynamic roofline of the S60 and now three rows of forward-facing seats in the XC90 - creating seven seats in a size where competitors struggle to seat five.

Towards a bright future

So, what about the future?

Because Volvo Car Corporation designs cars are completely digital, the designers and engineers work more rapidly and intelligently than most of their competitors.

Today, it's not only possible to design a car in a computer, Volvo's experts can also test drive it and perform crash tests - all before a single prototype is built.

The cars of the future will change and so will society and the people driving these cars.

Volvo will be part of this development, still Scandinavian, still different.

There will be cars in the future. And there will definitely be Volvo.

Keywords:
Special Interests
Descriptions and facts in this press material relate to Volvo Cars' international car range. Described features might be optional. Vehicle specifications may vary from one country to another and may be altered without prior notification.
Related Images
Sep 18, 2003 ID: 724 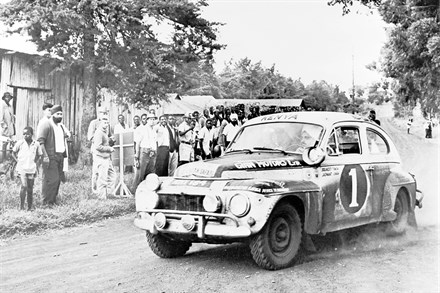