ROCKLEIGH, N.J. (Oct. 8, 2012) - Taking the first step in its endorsement deal with NBA point guard Jeremy Lin, Volvo will air a national TV ad highlighting the values that drove Lin from anonymity to stardom. His success story draws parallels to the commitment and values that make Volvo a unique luxury brand with an unmatched legacy of safety leadership.

The 30-second commercial - "The Unexpected Ones" - will begin airing nationally today on broadcast stations and cable networks, including ESPN and ESPN2. It will kick off during the morning segment of "SportsCenter," "Dancing with the Stars" in prime time, and additionally will appear during "First Take," "College Football," "20/20," "Criminal Minds," "The Mentalist," and "Law & Order SVU" throughout the rest of the week.

In the spot, Lin is seen leaving a celebrity event in a Volvo XC60 - the only European SUV with a 5-star rating from NHTSA and a Top Safety Pick from IIHS - standing out in passion red among a procession of dull, black limos. He first puts on the left turn indicator, then unexpectedly activates the right turn indicator instead and drives away from the crowd.

The subtle message connotes Lin's circuitous journey into NBA stardom, following being an undrafted guard out of the Ivy League. "No one expected me to be here. No expected me to be a starter, to hit game-winning shots. Or even play in this league," says Lin. "Well, I'm not here to live up to anyone else's expectations-I'm here to live up to mine."

Lin, a Harvard grad, is expected to help Volvo expand its reach in emerging markets and with younger customers. During a press conference in March, the Scandinavian luxury car brand announced the two-year, global endorsement deal, which focuses on China, the United States and other markets in Asia.

Keywords:
Volvo XC60, Sponsoring, 2013
Descriptions and facts in this press material relate to Volvo Cars' international car range. Described features might be optional. Vehicle specifications may vary from one country to another and may be altered without prior notification.
Related Images
Oct 08, 2012 ID: 46278 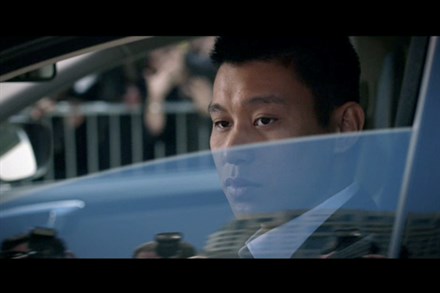