ROCKLEIGH, N.J. (June 12, 2012) -- Students from all over the world united in Gothenburg at the Volvo Adventure Awards to battle it out to be crowned winner of the world-class environmental education program. After experiencing tough competition across more than 45 countries, just 12 teams remained to fight for the coveted Volvo Adventure Award. Working in partnership with the United Nations Environment Program (UNEP), the award gives the young and environmentally aware a voice to gain recognition and support for their life-changing ideas.

The U.S. team, comprised of five students from Pontiac, Ill. and North Freedom, Wis., took third place after an intense two day competition with their initiative, "The National Prescription Pill and Drug Disposal Program".  The ultimate winners were the team from Paraguay with the Brazilian team taking second place. Other competition included the UK, China, Croatia, Egypt, Fiji, Russia, Tanzania, Turkey and Macedonia.

Throughout 2012, prescription drug disposal has been a hot topic in the U.S. P2D2 is a group of teenagers who wanted to make a difference. They organized a drug collection program dedicated to keeping the water systems of their communities safe from damage caused by the improper disposal of medication. The team raised awareness by using local government and media outlets, and provided communities with permanent disposal containers and incinerators. The team has even passed a bill to make its efforts permanent, which is currently running in over 22 states. To date, they have prevented over 600,000 pounds of drugs from contaminating our precious environment.

The legacy of the Volvo Adventure Awards goes far beyond its timeframe - throughout the years, youth groups carry on with their school projects and ignite lasting change. In 2008, Team TGIF from Rhode Island in the USA promoted the recycling of cooking grease to refine in to bio fuel. Since then, more than 120,000 gallons of wasted cooking oil was collected which produced about 100,000 gallons of biodiesel.  The students drafted a waste cooking oil recycling law and had it passed in July 2011.

This unique competition brings together children from across social, economic and cultural divides, each of whom has identified ways in which to improve their communities, from inner cities to deserted islands. Apart from taking home the ultimate prize, this event unites young people who will potentially achieve something many politicians can't - change.

** Note to editors: B-roll and interviews from the event are available **

Keywords:
Special Interests
Descriptions and facts in this press material relate to Volvo Cars' international car range. Described features might be optional. Vehicle specifications may vary from one country to another and may be altered without prior notification.
Related Images
Jun 12, 2012 ID: 44073 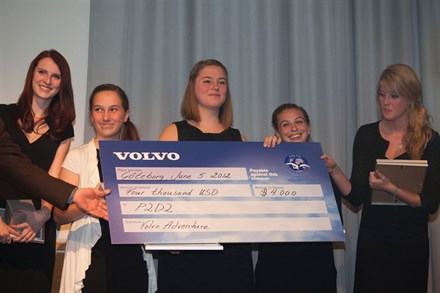