In a surprise twist, Volvo awards all seven- pirate finalists with an amazing treasure: a new Volvo vehicle of their own

(Abaco Island, Bahamas) August 10, 2006 — Arrrrrrrrrrrrrrrg! Hear me now, scallywags, the treasure’s done been found! David Hutz, a 30 year-old man from Herndon, Va., yesterday reached true pirate status when he uncovered a buried Volvo XC90 V8 SUV in the Islands of the Bahamas after a challenging two month global, multi-media treasure hunt for the vehicle that Volvo Car Corporation secretly hid as part of its sponsorship of Disney’s Pirates of the Caribbean: Dead Man’s Chest.

David Hutz a computer programmer from Herndon, Va. competed in a grueling, clue-filled search conducted by foot, boat, motor vehicle and helicopter in a competition reminiscent of reality TV shows. Upon completion of the race, he announced that he will be giving the car to his wife, Sheila Hutz. He was joined by six other finalists who also reached the final leg of the search, including two others from the United States as well as from Japan, United Kingdom, Spain and Austria.

The treasure hunt’s biggest surprise came when Volvo announced that all seven finalists would walk away with booty even Captain Jack Sparrow would be proud of: a new Volvo vehicle.

These individuals were the first among their respective nations to complete a fun, yet challenging, online treasure hunt presented by Volvo that launched on June 12, concluded four weeks later and elicited 52,000 participants in the U.S. alone. They arrived on the Islands of the Bahamas earlier this week unaware of the location of the final leg until their aircraft landed.

The seven competed in a series of mental and physical challenges on the islands that either eliminated them from competition or advanced them to the buried vehicle. After Hutz determined the final location, assistants dug up the $82,000 Volvo and presented him with the keys. Volvo also surprised the other finalists with keys to a new Volvo at the conclusion of the hunt.

Individuals worldwide will have a view all the excitement of the historic hunt when Volvo premieres a series of Webisodes chronicling the Hunt at www.volvocars.us/thehunt on August 25.

Other finalists in the Hunt included:

The buried one-of-a-kind, Volvo XC90 features a variety of elements inspired by Pirates of the Caribbean, including menacing graphics from the film, black leather seats, custom painted 20 inch wheels and more.

“While it would have been a lot of fun to watch Captain Jack Sparrow cruise the Caribbean Islands in this summer’s Pirates of the Caribbean, it just didn’t make sense,” said Anne Bélec, president and chief executive officer of Volvo Cars of North America. “So, we sought a more creative way to celebrate our partnership with Disney, and we think it’s been a phenomenal success for Volvo and we hope a lot of fun for would-be pirates worldwide, particularly these seven finalists.”

Volvo has been building cars with Safety in mind for over 75 years. The current 2006 model line-up of Volvo Cars includes: the award-winning new S40 and its wagon counterpart the all-new V50; the award-winning XC90; the sporty S60 sedan – including the award-winning performance sedan – S60 R and the performance wagon version – V70 R; the S80 luxury sedan; the versatile V70 wagon and rugged XC70 (Cross Country); and the soon-to-be released new Volvo C70, the convertible with the innovative retractable hardtop.

Keywords:
Events/Activities, Special Interests
Descriptions and facts in this press material relate to Volvo Cars' international car range. Described features might be optional. Vehicle specifications may vary from one country to another and may be altered without prior notification.
Related Images
Aug 11, 2006 ID: 3934 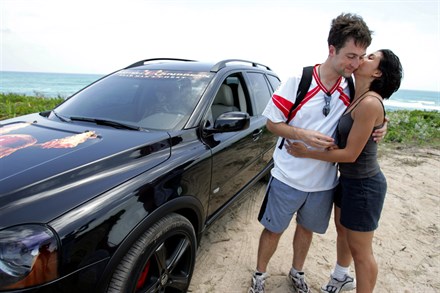 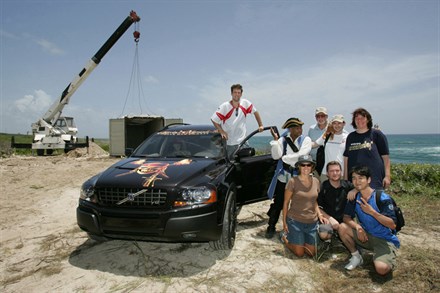