Volvo XC90 still impressive after all these years

Irvine, CA (April 4, 2011) - The Volvo XC90 has been awarded yet another accolade at the annual Northwest Automotive Press Association (NWAPA) Mudfest. Already a two-time defending SUV of the Year champion (2002 and 2003), the Volvo XC90 was named best Luxury SUV by the group at its recently held 2011 event.

"It's great to see such a grizzled veteran of the Mudfest competition still considered relevant today," said Doug Speck, President and CEO of Volvo Cars of North America. "To go up against competitors, some of which weren't around when the XC90 went on sale in 2002, and still walk away with a category win illustrates why the XC90 remains one of our top sellers. I couldn't be happier."

This year, Mudfest was held at the DirtFish Rally School in Snoqualmie, Washington. Twenty six of the leading automotive journalists from the Northwest drove and evaluated 20 different 2011 SUVs and crossovers during the competition.

The Pacific Northwest is true SUV territory and remains one of the nation's top sales markets for the entire line of Volvo's XC vehicles. During the one-day event, the XC90 was tested vigorously both on- and off-road. Pavement tests allowed the jurors to once again experience Roll Stability Control, the world-first anti-rollover safety system introduced in the XC90. Today, such systems are mandated by the National Highway Transportation Safety Administration (NHTSA) for SUVs and similar vehicles. Off-road, the XC90 shined with its advanced Instant Traction all-wheel-drive system, which places power to the wheel with the most traction.

NWAPA (www.nwapa.org) is a professional trade organization of automotive journalists from throughout the Pacific Northwest and Canada. Founded in 1991, NWAPA includes 45 voting members, representing more than 100 newspapers, magazines, radio stations, media groups and the Internet. Non-voting members are comprised of representatives from automotive manufacturers and related industry professionals.

Keywords:
XC90 (2002-2014), Awards, 2011
Descriptions and facts in this press material relate to Volvo Cars' international car range. Described features might be optional. Vehicle specifications may vary from one country to another and may be altered without prior notification.
Related Images
Jul 12, 2006 ID: 3862 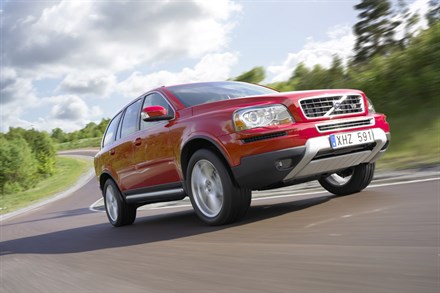