The Next Belt for Passenger Safety - 4 – Point Seat Belt Design

The Next Belt for Passenger Safety

Rockleigh, NJ - July 27, 2001 - 1959 was a pivotal year for automobile safety: Volvo introduced the world's first production use of three-point-seat belts. Throughout the years, this one safety feature has saved an estimated 123,000 lives, quite impressive for a few pounds of nylon and steel. In fact, no other safety device has ever saved so many lives. Last year approximately 11,000 people owed their lives to three-point belts and that number would almost double if more people used seat belts.

Today's three-point belt design is quite different from it's distant 1959 parent. Thanks to advances in materials, research, testing and real world use, seat belts are more effective than ever. Safety engineers also have better tools to help understand how a human body acts, and reacts, to vehicle crash dynamics which has resulted in incremental gains in seat belt design. For example, today seat belt webbing can be manufactured to stretch at a controlled rate to help soften the human load following a frontal impact. Also, by addition pyrotechnic pretensioning technology belt slack can be reduced thereby helping to properly position the occupant. With the seat belt designs of today, when used in combination with a frontal airbag, vehicle occupants have never been better protected.

Volvo Car Corporation, Sweden and Ford Motor Company, USA are collaborating on what could be next most important safety feature- a four point seat belt. The team is headed out of Sweden by Christer Gustafsson, VCC Senior Safety Engineer and David Wagner, FMC Safety Technical Specialist. The advantages of a four-point seat belt are that they distribute the crash forces over more of the chest which reduces the pressure on the ribcage, heart and lungs. They also help hold the occupant in place during crashes that put limitiations on todays belt designs.

Two new innovative styles are being evaluated: the "X4" design and the "V4" design. Both have the same objective yet with different unique solutions. "X4" belt system utilizes a standard three-point belt plus a single belt that comes over the shoulder, down across the torso and attaches near the lap belt buckle. The "V4" is a modified design with roots in automobile racing. Occupant fitting is as simple as putting on a backpack. It's as simple as 'over the shoulder/over the shoulder and click. Both designs have shown to be effective in rollover and side impact during laboratory tests.

One major unknown about four-point belts is how users would accept them . "During the Detroit International Auto Show, Ford Motor Company asked show attendees to assess ease of use and comfort for both styles. This is perhaps the first use of an autoshow to conduct one-on-one safety research. We were very eager to watch people's reactions and discuss their concerns" comments Wagner. What was the answer? "Consumers were very excited about the prospects of additional safety benefits from the four-point belt. We're still weighing the advantages of both designs."

"While a few engineering challenges remain, I believe we'll have something to in the next 3 years that meets the expectations of our engineering teams here in Sweden and Dearborn and of course those of our customers" states Gustafsson. "In the near future, we will be entering into discussions with regulatory agencies around the world including the U.S. National Highway Traffic Safety Administration (NHTSA), to discuss our findings and the regulatory implications of four-point belts."

Keywords:
Safety
Descriptions and facts in this press material relate to Volvo Cars' international car range. Described features might be optional. Vehicle specifications may vary from one country to another and may be altered without prior notification.
Related Images
Sep 18, 2003 ID: 366 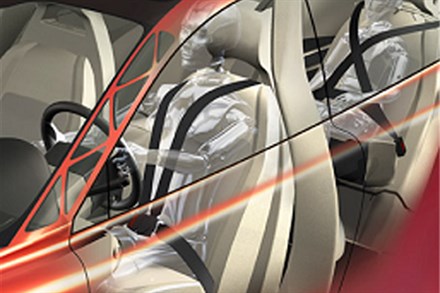