For only $1, purchase a virtual cup of limited edition "peppermint lemonade" at www.lemonadestandforlife.com with contributions being directed to Alex's Lemonade Stand Foundation

ROCKLEIGH, N.J. (DEC 8, 2010) - Volvo Cars of North America (VCNA) is teaming up with Alex's Lemonade Stand Foundation (ALSF) during the holiday season to help families gain easier access to medical care and clinical trials at hospitals outside of their hometown.

Through Jan. 1, 2011, donations made at Volvo's Virtual Lemonade Stand, www.lemonadestandforlife.com, will go to ALSF's Travel Fund, which benefits families without the financial means to travel to some of the nation's top medical facilities.

"As a founding sponsor of ALSF, our mission has been to bring awareness to the cause and to raise money to help these kids," said Doug Speck, president and chief executive officer of Volvo Cars of North America. "We hope our support encourages others to purchase virtual cups of peppermint lemonade this holiday season, when the struggles of families affected by pediatric cancer are heightened."

For only $1 each, virtual cups of limited edition peppermint lemonade can be purchased at the online stand. By sharing cups via e-mail, Facebook and Twitter with family and friends, purchasers are spreading holiday cheer and good will, while shedding light on the important work ALSF is doing.

About Volvo and ALSF
Alex and her lemonade stands first caught the attention of Volvo in 2002 when she received an inaugural Volvo for life Award nomination. The awards program honored hometown heroes doing extraordinary things in their communities.  Alex's determination and unwavering support for pediatric cancer research earned her a Volvo for life Award at the 2003 ceremony in New York City. Despite her deteriorating health, Alex continued to raise money through her stands.

In 2004, Alex set a remarkable goal: call upon the nation to raise $1 million to fight pediatric cancer before the year's end. Sadly, Alex died Aug. 1 at the age of 8, having raised an amazing $700,000, but with the knowledge that Volvo would help her reach her  $1 million goal. The company's employees and retailers did so in October of that year by selling lemonade.

By the end of 2004, one little girl had made a world of difference, raising $1.5 million. Since then, Volvo has shown unwavering support of ALSF, helping to keep the inspiration and legacy of Alex alive. To date, ALSF has raised more than $35 million.

More About ALSF
Alex's Lemonade Stand Foundation (ALSF) emerged from the front yard lemonade stand of cancer patient Alexandra "Alex" Scott (1996-2004). At the age of 4, Alex announced that she wanted to hold a lemonade stand to raise money to help find a cure for all children with cancer. Since Alex held that first stand, the Foundation bearing her name has evolved into a national fundraising movement, complete with thousands of volunteers across the country carrying on her legacy of hope. To date, Alex's Lemonade Stand Foundation, a registered 501(c)3 charity, has raised more than $35 million towards fulfilling Alex's dream of finding a cure, funding over 150 research projects nationally including those examining leukemia, brain tumors, neuroblastoma, Wilm's tumor, lymphoma, and osteosarcoma among others.

Keywords:
Mission
Descriptions and facts in this press material relate to Volvo Cars' international car range. Described features might be optional. Vehicle specifications may vary from one country to another and may be altered without prior notification.
Related Images
Dec 09, 2010 ID: 35810 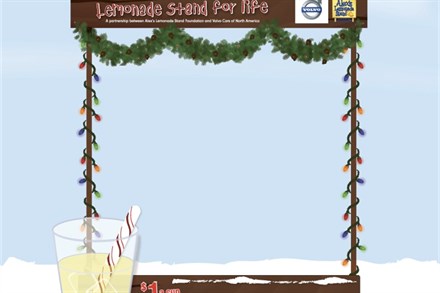