MAHWAH, NJ (July 22, 2022) Bogi Lateiner, founder of Girl Gang Garage, in partnership with Volvo Cars and BASF, is calling attention to the need for more women in the trades by building a custom plug-in hybrid electric Volvo car with a team of women from around the world. Now, followers of the build will have a chance to vote on the vehicle’s final paint color from a selection of paints produced by BASF.

Dubbed the Iron Maven, the build consists of a 1961 Volvo PV544 retrofitted with the 415 horsepower powertrain and hundreds of other systems, parts and components from a 2021 Volvo S60 T8 Recharge Polestar Engineered sedan. It’s the ultimate resto-mod, being reconstructed by hand through thousands of woman-hours and scheduled to be revealed at the 2022 SEMA Show in Las Vegas on November 1.

Lateiner, BASF, and painter Connie Manjavinos created three paint colors paying homage to the past, present, and future of the Swedish automaker’s history. The color choices include:

To vote, fans can visit https://girlganggarage.com/iron-maven-color-contest/ where the poll is now live. The completed Iron Maven, painted in the winning color, will be revealed November 1, ahead of the 2022 SEMA Show at the BASF stand at the Las Vegas Convention Center. Voting closes in early August.

Kicked off in 2021, the Iron Maven project is part of Volvo Cars’ larger initiative to call attention to the need for more women in the auto industry and recruit female service technicians into its retail network. Since it commenced, a number of tradeswomen have joined the Volvo Cars retailer network as service technicians through several accelerated training programs for recent graduates, military veterans, and trained automotive technicians.

Iron Maven is the third All Female Build from Girl Gang Garage and the most complex to date. It represents the largest build of its kind, with more than 150 women participating from around the world. The Volvo Cars Technical Support team, based in both the United States and Sweden, is assisting with select component and system integration.

“This unique and ambitious project is a celebration of past, present and future,” said Bogi Lateiner, owner of Girl Gang Garage. “The Iron Maven celebrates Volvo’s heritage while integrating its present technology, celebrates women in trades while welcoming new women into the fold, and honors the heritage of car building while integrating modern technology such as 3D printing. It’s been a pleasure leading this project that means so much for so many.”

A ‘barn find’ in the Phoenix, Arizona area, the Volvo PV544 represents a combination of the modest classicism that is the company’s heritage. Designed and built in an analog era the car is being heavily modified to accommodate the technologically advanced elements from the S60 T8 Polestar Engineered sedan, including the plug-in hybrid electric drivetrain – a Drive-E, four-cylinder gasoline engine paired with electric motors. Modern vehicle control systems, the Polestar Engineered suspension and the Sensus infotainment system are all planned for integration. Major modifications, custom 3D-printed components, hand fabrication and technical analyses ensure the final car carries through the essence of classic, current and forward-looking elements and approaches.

Keywords:
Corporate News
Descriptions and facts in this press material relate to Volvo Cars' international car range. Described features might be optional. Vehicle specifications may vary from one country to another and may be altered without prior notification.
To view the full copyright information click here
Media Contacts
Related Images
Jul 22, 2022 ID: 303030 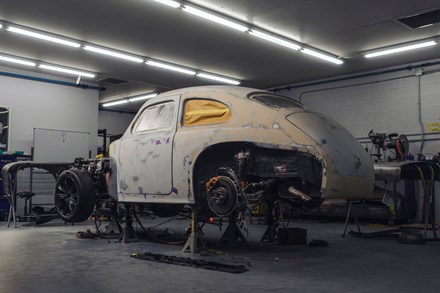