World unveil to take place at the 2005 Frankfurt Motor Show

Irvine, CA (July 15, 2005) – Volvo Cars of North America, LLC (VCNA) today released the first official photos of the all-new Volvo C70. With its innovative three-piece retractable hardtop, the second generation C70 is a car that offers the best of both worlds. With the top up, it's a sporty coupe with dramatic, head-turning style. With the top stowed below the rear deck, it's an open-air convertible that invites wind-in-the-hair fun and excitement. What makes the all-new C70 even more appealing is that there is room for four people.

The all-new Volvo C70 will be unveiled at the 2005 Frankfurt Motor Show in mid-September, with sales beginning in the U.S. in the spring of 2006 – just in time for summer.

“We’ve succeeded in creating an attractive convertible which, at the mere touch of a button, converts into an equally elegant coupe. The customer gets two cars in one. Both with space for four adults,” says Volvo Cars President and CEO Hans-Olov Olsson.

Style-conscious convertible buyers will find the design of all-new C70 offers all of the freedom of a soft top, with the utility and personal security that only a hardtop can deliver upon. The forward-thrusting nose section and aggressively raked rear glass gives the car a powerful profile. “Putting together harmonious lines both with and without a roof is no easy job,” says Fedde Talsma, design manager for the all new Volvo C70. “We decided to start with the bold shape of a sports coupe and when we were satisfied with the result, we made the necessary adjustments to create a convertible.” Along its flowing fenders are the now ubiquitous shoulders that have become a Volvo design icon.

The all-new Volvo C70 was developed to offer new standards of preventive and protective safety in the convertible market. The car has an advanced body structure and several solutions that make it unique among open-top cars. The lack of a fixed roof has been compensated for by reinforcements in the structure and sophisticated safety technology. One unique example is the new door-mounted inflatable curtain, which is part of the enhanced protection system for side impacts. Since the door-mounted inflatable curtain cannot be fitted within the headliner like other Volvos, it is fitted in the door and inflates upwards when it is deployed.

Volvo's safety engineers have fine-tuned the door-mounted inflatable curtain to be extra stiff. As a result, it remains upright for a longer period of time and helps to better protect the head in the event of a side impact. In addition, the curtain deflates slowly to help provide additional protection if the car rolls over. This is a unique solution in the automotive world.

The body structure, in a carefully designed network of beams, not only contributes to the car’s high safety standards, it also gives the body extremely high torsional rigidity – twice as high as that of the previous C70 Convertible. With the roof up, torsional rigidity is increased by an impressive 10-15 percent over the convertible.

“A torsionally rigid body is important to the car’s ride and handling traits,” says C70 project manager Patrik Widerstrand. “It makes the car more stable and easier to control. It also makes the car more dynamic and fun to drive.” In the U.S. the all-new Volvo C70 will be powered by 2.5-liter in-line five-cylinder turbocharged engine that produces 218 hp and offers 236 lb.-ft. of torque.

The development and manufacture of the all-new Volvo C70 is the result of a joint venture with renowned Italian company Pininfarina. “Pininfarina is an excellent partner with long experience of developing and building convertibles,” said Hans-Olov Olsson. Like its predecessor, the car will be built in Uddevalla, Sweden.

The first-generation C70 Convertible had its best year in 2004 with just over 8,000 cars sold globally. U.S. sales in 2004 totaled 4,069 units. “Our all new C70 is one of the first open-top cars in the premium segment with both a steel roof and space for four adults. We believe this is a highly sought-after combination. That’s why we expect to more than double our sales compared with the first-generation C70,” says Hans-Olov Olsson.

Volvo has been building cars with safety in mind for over 75 years. The 2006 Volvo Cars model line-up includes: the award-winning new S40 and its wagon counterpart the all-new V50; the award-winning XC90; the sporty S60 sedan – including the award-winning performance sedan – S60 R and the performance wagon version – V70 R; the flagship S80 luxury sedan; versatile V70 wagon and the rugged XC70 (Cross Country).

Keywords:
C70, 2006
Descriptions and facts in this press material relate to Volvo Cars' international car range. Described features might be optional. Vehicle specifications may vary from one country to another and may be altered without prior notification.
Related Images
Jul 15, 2005 ID: 2832 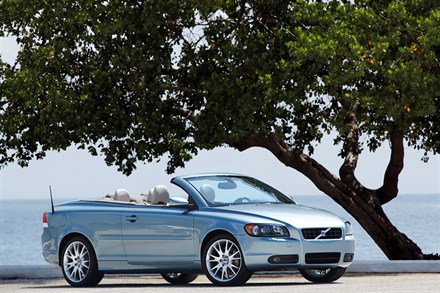 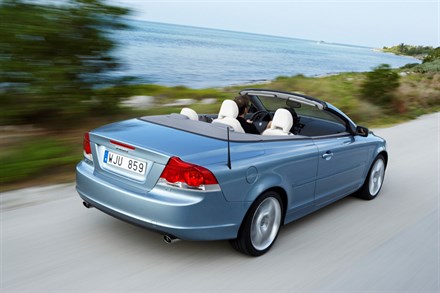