First prize in the Volvo Adventure 2005 was awarded to Ladysmith Enviro Club from South Africa which carried out a project entitled “Electrical Efficiency from Our Town”. The team’s 5 members worked to increase the use of low-energy bulbs and thus reduced energy consumption and emissions of carbon dioxide, a greenhouse gas. Curt Germundsson from Volvo Cars’ executive management handed over the $10,000 USD prize during the awards ceremony in Göteborg. The grant will finance the group’s ongoing pro-environmental work.

The eco-focused 16-year-olds had replaced more than 4000 bulbs with low-energy variants in households, schools and bed & breakfasts in the town of Ladysmith. According to the group’s own calculations, the low-energy bulbs have reduced energy consumption by about 1,584,000 kWh. The group also planted trees to increase carbon dioxide absorption and thus reduce the global greenhouse effect. In addition, the project promoted partnerships with other pro-environmental organizations, companies and schools with the aim of marketing an ecologically sustainable lifestyle.

Jury chairman Theodore Oben from UNEP (United Nations Environment Program) had the following to say about the winning team’s efforts:

“These kids have demonstrated that it is actually possible on an individual level to work to reduce global environmental problems such as the greenhouse effect. It’s an excellent example of the concept of ‘Think globally but act locally’.”

The second prize, $6,000 USD, went to a group called “The Keeper of the Gwangju River”, which worked to improve water quality in the Gwangju River in South Korea. When work got under way in 2001, the river was so polluted and dirty that nothing lived in or near in its waters. However, through information campaigns directed at the population living along the riverbanks, life has gradually returned and both plants and animals now live in and alongside the Gwangju River.

The project “Win '05: Recycle and Re-use Our E-Waste” was carried out by Westerly Innovations Network, Babcock Middle School in Westerly, R.I. (USA). The group worked on the recycling and reuse of scrap electronic materials. In addition to educating the general public on recycling issues, it collected more than 11 tons of electronic waste that would otherwise have ended up in the refuse dump and dispatched it for recycling. The team’s excellent efforts secured a third place and a prize of $4,000 USD in the Volvo Adventure 2005.

Volvo Adventure is a joint project run by the Volvo Group, Volvo Car Corporation and UNEP. It is an Internet-based global environmental-education program for youngsters aged between 10 and 16, and its aim is to increase the environmental expertise of tomorrow’s decision-makers and consumers. Part of the education program consists of a competition structured around groups of a maximum of five participants who undertake environment-promotion projects. The three best teams are rewarded with a development grant of $10,000, $6,000 and $4,000 US dollars respectively.

Together with UNEP, the United Nations Environment Program, Volvo is continuing to challenge youngsters the world over via the Volvo Adventure. The next competition series is already open for new projects. The last day to register is January 31, 2006. The best projects are invited to the Volvo Adventure finals in Göteborg and in addition to its development grant, the winning team will also receive an invitation to participate in the annual UNEP conference for children and youths.

For more information about the program and the competition:

Keywords:
Lifestyle, Environment, Events/Activities, Special Interests
Descriptions and facts in this press material relate to Volvo Cars' international car range. Described features might be optional. Vehicle specifications may vary from one country to another and may be altered without prior notification.
Related Images
May 10, 2005 ID: 2694 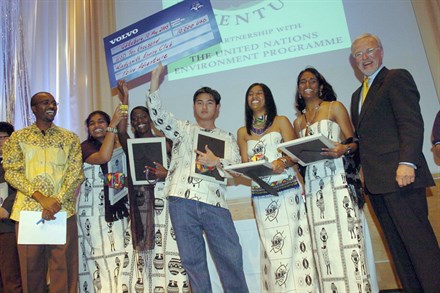