Volvo Syncs Up With Itunes Music Store For “Nu: The Sounds of New Scandinavia”

On March 23, Volvo will present a live music and multi-media event in Times Square to launch “nu: the sounds of new Scandinavia,” with music available on the iTunes Music Store to promote developing Scandinavian artists and building awareness for the region’s distinct sound.

Volvo’s “nu” (which is Swedish for “now”) will feature a monthly 12-song digital compilation featuring music from emerging Scandinavian artists, hand-picked by Volvo. Select tracks will be available for free and each volume will feature cover artwork with a unique Swedish design.

Thomas Andersson, executive vice president, marketing for Volvo Cars of North America, noted that the initiative is an extension of an ongoing effort at Volvo to support the Scandinavian music scene and integrate artists from the region into the marketing of the Volvo brand.

“Innovative Scandinavian design and engineering are elements that the Volvo brand has been exporting worldwide for more than 75 years,” Andersson said. “The combination of iTunes and iPod are a perfect fit for our customers, and now with ‘nu’ we can further refine the music experience with the best Scandinavian music for our customers.”

Volvo will promote “nu” through a variety of initiatives, including:

To learn more about the initiative, visit www.volvocars.us/itunes beginning March 23.

To mark Volvo’s launch, on March 23 the company will hold a live concert and multi-media celebration at Times Square Studios, Ltd., in New York City.

Also called “nu: the sounds of new Scandinavia,” the media-only event will officially launch Volvo’s showcase of Scandinavian music on the iTunes Music Store. It also will feature live performances by emerging Nordic bands Sahara Hotnights, The Ark and The Drowners, and music via an iPod DJ.

“As an independent label manager, I feel iTunes offers a great opportunity for a band to get its music to fans quickly and efficiently,” said Janne Grinde, independent label manager for Hijack Records, which plans to feature artists such as The Dandelions on “nu.” “Volvo’s initiative to promote Scandinavian music through this channel in the United States is an exciting development and a truly innovative approach to marketing its brand while supporting emerging creativity from the Nordic region. We're glad to be on-board.”

Volvo is offering two iPod connectivity options for its entire 2005 US model line, allowing iPod users to listen to their music collection through their Volvo audio system. The Volvo iPod Adapter will be available for S60, S80 and V70/XC70 models and will connect by simply plugging the iPod into a cable located in the car’s armrest compartment. Volvo S40, V50 and XC90 owners can use a dashboard mounted FM transmitter. The Volvo iPod Adapter allows users to control their music through their Volvo sound system and steering wheel controls, and both options charge the iPod when it is connected.

Both options will be available beginning in June as authorized Volvo retailer-installed accessories.

Keywords:
Technology, Special Interests
Descriptions and facts in this press material relate to Volvo Cars' international car range. Described features might be optional. Vehicle specifications may vary from one country to another and may be altered without prior notification.
Related Images
Mar 17, 2005 ID: 2660 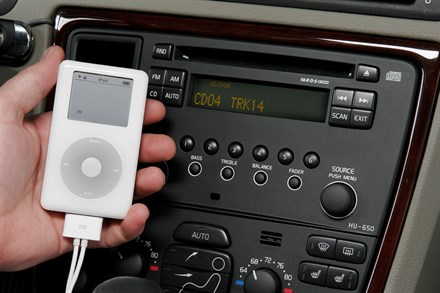 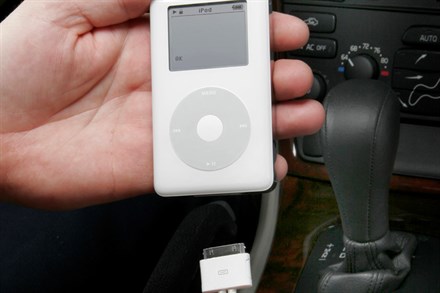