Occupying a large free-standing display, the S60 safety simulator is a full motion simulator utilizing high-definition graphics and recreated ultra-realistic driving situations. Drivers are prompted to fasten their seatbelts, start the car, and even place the vehicle in "Drive" before getting underway. The car responds to driver input by pitching and diving during acceleration and braking. The road ahead is displayed on a high-definition screen with motion that is matched to the vehicle's speed.

Throughout the six-minute experience, the driver is placed in situations that highlight Volvo's safety systems. For instance, if the driver chooses to pass in an unsafe manner, Emergency Lane Assist steps in to help direct the S60 back into the appropriate lane. Other situations experienced by the driver center on Volvo's Blind Spot Information System (BLIS) and Adaptive Cruise Control (ACC).

With these latest developments, Volvo is cementing its leadership position among safety-conscious car manufacturers. A key component to this objective is that every new Volvo model should represent clear progress in protecting the car’s occupants. This has been demonstrated consistently in recent years with innovative solutions that enhance safety in a collision, for instance in the Volvo XC90, Volvo S40 and Volvo V50. However, in order to retain its lead in vehicle safety from a holistic perspective, Volvo Cars has also intensified its focus on systems that predict and prevent accidents.

The protection of people and property is another Volvo concern and is an important part of a comprehensive approach to safety. “Preventing accidents and reducing the number of injuries and fatalities in traffic are both high on the agenda of an increasing number of countries," said Ingrid Skogsmo, Director of the Volvo Cars Safety Center. "We see everything from so-called zero-limits in Sweden and the Netherlands to national goals of between 30 and 50 percent fewer accidents over the coming ten-year period. As a leading company in the field of car safety, Volvo must naturally play an active part in working toward these goals. However, the car is only one of many factors. Making traffic even safer requires an over-riding grasp of the infrastructure and research into driver behavior. There are many of us who share responsibility here and who must work together on these issues.”

A lot has happened since the car was born more than a century ago. Traffic is heavier, speeds are far higher and the car has become far more technically advanced. Man, on the other hand, has not changed at the same fast rate. The swift pace of development in information technology and the emergence of highly efficient and compact electronics have opened the door to entirely new opportunities in preventive safety.

The basic idea is to create a car that helps the driver notice potentially dangerous situations ahead of time. Ultimately, a car should think and respond faster than the driver does in these critical instances. In recent years, Volvo Cars has presented a number of systems for this purpose. The advanced Volvo Safety Concept Car (SCC) that was unveiled at the Detroit Auto Show in 2001 is a benchmark vehicle in terms of future safety systems and innovations. Today, more than half of the 50 or so safety solutions displayed in the Volvo SCC are already integrated into existing cars or planned for inclusion in forthcoming models.

One of the greatest challenges is to coordinate all these sophisticated systems so that they offer the greatest possible benefit. The driver must receive the right information at the right time – without being distracted by irrelevant information in stressful situations.

Most of the functions in today’s Volvo cars are already controlled electronically, and the various systems communicate with each other via a sophisticated network. Volvo has developed IDIS – Intelligent Driver Information System – which was introduced as a world-first in the new Volvo S40 in 2003.

IDIS continuously monitors certain functions in the car, such as steering wheel movement, throttle activity, the use of the turn signal indicator and the degree of braking. This information is processed and at a given level of activity, information that is not crucial to safety – such as a burned out bulb indicator – is delayed until the situation is resolved.

The focus on the car is only the first step

In the future, IDIS will be incorporated into a more comprehensive information system that can keep track of a vast amount of information in the car. The aim is to further reduce the driver’s stress and to make driving easier. The systems and functions currently being developed and presented focus on the driver’s situation based on three main perspectives: the car, the traffic situation and the human being.

Focus on the traffic situation

For more comprehensive assessment of the driving situation and in order to provide the driver with assistance in certain cases, Volvo Cars has developed a number of advanced functions that monitor the traffic outside the car.

Large windows and effective rear-view mirrors generally provide good all-round vision. Back in 1979, Volvo was the first automaker to fit a wide-angle mirror on the driver’s side to further improve offset rear visibility. BLIS goes one step further by using a camera in each rear-view mirror to monitor the area alongside and offset behind the car.

When another vehicle enters the monitored zone, a lamp comes on in the relevant mirror. The driver gets a clear indication that there is another vehicle in the blind spot and can keep away. The system provides information about cars approaching from the rear and also vehicles in front that the driver is currently overtaking. This information gives the driver added scope for making the right decision in such situations. Both sides are monitored in the same way.

Today’s cruise control system contributes to calm, relaxed cruising under favorable conditions. However, the rhythm of modern traffic does not always allow continual use of the system.

In order to contribute to increased comfort and driver control in uneven traffic flow and heavy congestion, Volvo has developed a system called Adaptive Cruise Control. Using a radar sensor, the system continuously monitors the distance to the vehicle in front and automatically adjusts the car’s speed to maintain a safe distance.

The driver activates Adaptive Cruise Control by keying in the required maximum speed and selecting the minimum time gap to the vehicle ahead. This time gap can be varied from one to three seconds. A gap of two seconds, for instance, means a safety distance of about 200 feet at 60 mph. This distance shrinks as speed decreases, and is about 130 feet at 43 mph.

The system adapts automatically when an overtaking vehicle enters the lane in front of the driver and maintains the preset distance. In a car with an automatic transmission, Adaptive Cruise Control can keep pace with the flow of traffic all the way to a complete standstill.

Rear-end impacts and collisions involving stationary vehicles are both common accident scenarios. In many such cases, the cause of the accident is driver distraction and failure to react in time.

Volvo has developed an advanced system of auxiliary functions that help the driver avoid such accidents or minimize the effects of a collision should one occur. This is done by reducing the total stopping distance.

The area in front of the car is continuously monitored with the help of a radar sensor. The system is activated in different ways at different stages of the sequence. If the car approaches an obstacle (stationary or moving) and the driver does not react, a warning lamp comes on and is reflected in the windscreen. At the same time, an audible buzzer sounds. In certain situations, this is sufficient to catch the driver’s attention and avoid the hazard.

The system monitors pedal pressure when the driver brakes. If the pressure is assessed as being too light for the car to be able to stop in time, the system steps in and increases braking power. If the vehicle's speed is not too high, this brake boosting function can help avoid a collision.

If, on the other hand, the driver does not react at all, a brake function is automatically activated to build up higher braking pressure and slow down the car. It may not be possible to avoid a collision, but the main purpose here is to reduce speed and the risk of severe consequences.

To provide this automatic braking function, the radar system is supplemented with a forward-sensing wide-angle camera fitted in front of the interior rear-view mirror.

Many accidents in which cars drive off the road take place in relatively good traffic and weather conditions, often because the driver loses concentration for one reason or another. Volvo Cars is developing a series of functions that help the driver in such situations.

1. Lane Departure Warning uses a camera in the rear-view mirror to continuously monitor the road and keep track of where the car is in relation to the lane markings. If the driver loses concentration and the wheels move outside the lane markings, a warning buzzer alerts the driver, and this is often sufficient to get him or her to react.

2. Lane Keeping Aid goes one step further. In addition to the audible signal, the system actually steps in and helps steer the car back on course. This steering capability is relatively limited. The aim is not to take over the steering. Instead, the maneuver is usually sufficient to help the driver take action to keep the vehicle within the current lane.

Lane Departure Warning and Lane Keeping Aid are switched off when speed is below 43 mph so they do not interfere in urban conditions when deliberate lane changes take place all the time. The functions can also be switched off manually.

3. The third function, Emergency Lane Assist, is a world breakthrough. Using both camera and radar, Emergency Lane Assist can also monitor oncoming vehicles. If the driver crosses the lane markers and does not respond to the buzzer, the system reacts by applying additional steering force to help steer back into the intended lane. This function is active at all speeds.

Focus on the human being

No matter how safe the car is and how well the traffic situation can be controlled, safety is still always dependent on the human being – the driver – staying alert and taking the right decision at all times. And nobody is perfect.

That is why Volvo Cars has developed an advanced assistant for the driver – the Volvo CoDriver. Volvo CoDriver is an intelligent assistant that coordinates information from the car’s various systems and functions, studies the traffic situation and assists the driver in a number of ways.

What is more, Volvo CoDriver will attempt to sense if the driver is not at his or her best owing to tiredness or stress, for instance, and can alert him or her to this fact. If necessary, the system also steps in and reduces the burden on the driver by tailoring incoming information and activating the relevant help functions. Volvo CoDriver thus helps give the driver added margins and makes driving that much safer.

Keywords:
Old S60, SCC, Safety, Technology, Special Interests, Concepts
Descriptions and facts in this press material relate to Volvo Cars' international car range. Described features might be optional. Vehicle specifications may vary from one country to another and may be altered without prior notification.
Related Images
Sep 18, 2003 ID: 243 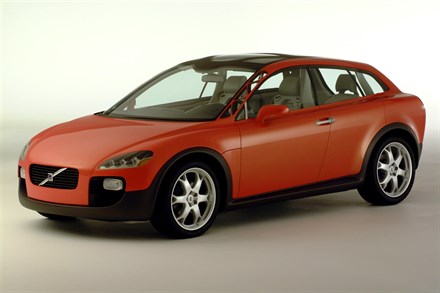 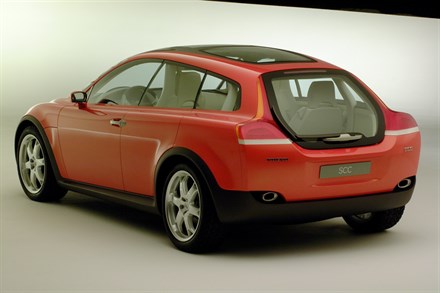