Experts continue recognizing Volvo cars and SUVs for being the best

U.S. consumers can learn more about and shop for all new Volvo cars by visiting www.volvocars.com/us

“You know you’re doing something right when the car experts keep saying great things about your cars,” said Anders Gustafsson, Senior Vice President Americas and President and CEO Volvo Car USA. “It means Volvo buyers can be confident they are making a smart purchase, not because we say so, but because the experts do.”

The all-new Volvo S60 luxury sedan won the 2019 MotorWeek Drivers’ Choice Award for Best Sport Sedan. Since 1983 MotorWeek staff have been recognizing the cars and trucks they would like to have parked their driveways, or at least dream about owning if they won the lottery. They look at the factors mattering most to consumers - price, practicality, performance and fuel efficiency.

The S60 is the first Volvo car made in America. It features all the design, technology and safety features found in the company’s award-winning XC90 and XC60 SUVs. The S60 is available via traditional purchase or lease, as well as Care by Volvo subscription.

"We began our road test of a Made in America all-wheel-drive Volvo S60 T6 R-Design expecting a car that delivers understated Swedish-style luxury and comfort, and over delivers on safety and technology,” said John Davis, creator and host, MotorWeek, television's original and longest running automotive series. “Well, we found all that. But we also found a car fully capable of competing with Europe’s best known sporty four-doors. We were impressed at the spot-on chassis tuning, the instant rush of power, the brakes, really everything about the S60. It simply wowed us."

The Midwest Automotive Media Association named the XC40 SUV its 2019 MAMA Luxury Family Vehicle of the Year. Based in Chicago, the MAMA consists of more than 240 journalists representing influential websites, news outlets, and social media channels across the country.

“The XC90 earned Consumer Guide® Best Buy recognition for its sumptuously trimmed cabin; better-than-class-average fuel economy from its 4 cylinder engines; and loads of innovative and unconventional features that set it apart from the competition,” said Tom Appel, publisher, Consumer Guide® Automotive. “The XC40 offers surprisingly high levels of luxury, style, and all around refinement in a petite, modern, urban-friendly package.”

And finally, local weekly news source Chicago News named the XC40 its 2019 SUV/Crossover of the Year, the third consecutive year Volvo has been recognized.

Keywords:
XC90, XC40, S60, 2019, Product News
Descriptions and facts in this press material relate to Volvo Cars' international car range. Described features might be optional. Vehicle specifications may vary from one country to another and may be altered without prior notification.
To view the full copyright information click here
Media Contacts
Related Images
Dec 17, 2018 ID: 247233 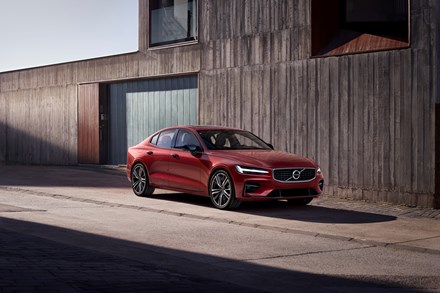