IRVINE, Calif. (October 4, 2004) – Alexandra Scott was a young girl from Wynnewood, Pa., who suffered neuroblastoma, an aggressive childhood cancer. She had a remarkable goal: To call upon the nation to raise $1 million to fight pediatric cancer this year through the sale of lemonade at neighborhood lemonade stands.

Sadly, she passed away Aug. 1 at age eight, having raised an amazing $700,000 — almost three-fourths of the way toward her goal. But, thanks to one of the nation’s largest-ever fund-raising efforts for local charities, her dream will be realized in cities across the country this Columbus Day weekend.

Thousands of Volvo employees will put their sales skills to the test Oct. 9-11 — to sell lemonade for Alex. More than 300 retailers nationwide are hosting lemonade stands during Volvo Drive for life Days to finally meet Alexandra Scott’s $1 million goal to fight pediatric cancer. The lemonade will be provided by Whole Foods Market, the world’s largest natural and organic foods supermarket.

Scott gained national recognition for starting an international grassroots movement to raise money for pediatric cancer research through lemonade stand sales. At age four, three years into her battle against neuroblastoma, Scott decided to take action and raise funds to help “her hospital” and to find a way to “make all kids’ cancer go away.”

What started out as the quintessential child’s lemonade stand –– front yard stand with home-made signs –– soon grew to an international effort with children in all 50 states, Canada and France raising hundreds of thousands of dollars for her cause.

In 2003, Scott was named one of the nation’s top 10 heroes in the Volvo for life Awards, the nation’s largest annual search for and celebration of everyday heroes. “Volvo had the honor of knowing Alex through our awards program,” said Vic Doolan, president and CEO of Volvo Cars of North America. “She captured our hearts and inspired us with her ability to live life to the fullest and to help others. She was a true hero. We wanted to do something in the spirit in which she lived her life to help reach her $1 million goal. We’re putting our hearts and souls into lemonade sales this Columbus Day weekend and with the help of our customers, I know we can do it.”

In addition to lemonade sales, Volvo retailers nationwide will donate at least $10 for every test drive of a 2005 Volvo over Columbus Day weekend to a local hero or charity. “Alex’s legacy of community involvement inspired us to extend our weekend’s fund-raising efforts to the local community. We asked our retailers to choose a local hero or charity that was close to their hearts so we could keep Alex’s passion and spirit of giving alive,” Doolan added.

For more information about Alexandra and to make a donation to Alex’s Lemonade Stand Fund, visit www.alexslemonade.com.

For more information about Volvo Drive for life Days, including locating a retailer in your area and finding out which local hero or charity it is supporting, visit www.volvoforlifeawards.com.

Keywords:
Events/Activities, Special Interests
Descriptions and facts in this press material relate to Volvo Cars' international car range. Described features might be optional. Vehicle specifications may vary from one country to another and may be altered without prior notification.
Related Images
Oct 04, 2004 ID: 2315 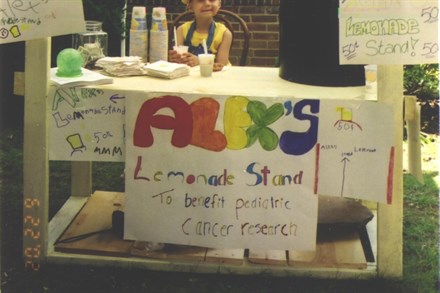