IRVINE, Calif. (September 13, 2004) – In what is expected to become the nation’s largest one-time fundraiser for local charities, hundreds of Volvo car retailers on Columbus Day weekend (Oct. 9 – 11) will conduct a fund drive for a select local charity.

The retailers are participating in Volvo Drive for life Days, a weekend-long effort by close to 300 Volvo retailers in cities nationwide to raise hundreds of thousands of dollars for their local charities.

The retailers are calling on people to visit their facilities that weekend to test drive any 2005 model Volvo car. For every test drive taken, the Volvo retailers will donate $10 to a local hero or charity.

According to Vic Doolan, Volvo Cars of North America’s chief executive officer, the company created the initiative as a way to localize the benefits of its Volvo for life Awards program, an annual national search for and celebration of local heroes, which provides more than $1 million in contributions to honor everyday heroes.

“Volvo Drive for life Days marries the Volvo for life Awards’ commitment to promoting the values of conscience, care and character in communities across America with our business of creating some of the safest, best quality and most environmentally friendly vehicles on earth, “ Doolan said. “And, it does this within the walls of Volvo Retail Facilities across the nation.”

In addition to its local fundraising activities, Volvo retailers also that weekend will hold “Alex’s Lemonade Stands” in honor of Alexandra Scott, a young cancer patient from Philadelphia who gained national attention for her efforts to raise money for pediatric cancer by holding annual lemonade stands. Sadly, Scott passed away Aug. 1 at age eight, three-fourths of her way toward her goal of raising $1 million to fight pediatric cancer.

Volvo retailers nationwide will conduct lemonade stands at their facilities to achieve Volvo’s pledge to help the Scott family reach Alex’s $1 million goal. In 2003, Scott was named one of the nation’s top 10 heroes in the Volvo for life Awards.

“Alex was a true hero: Life dealt her the most bitter of lemons, yet she made out of her life the sweetest lemonade,” Doolan said. “She humbled us with her ability to live life to the fullest and to help others. Her work also inspired us to create this program – with thousands of Volvo employees dedicating a weekend to raise monies for local charities. Whether it’s for Alex or for a local charity, we’re conducting hundreds of local fundraisers to help awaken the spirit of community involvement, just as Alex did.”

For more information on Volvo Drive for life Days and the Volvo for life Awards, visit

Keywords:
Lifestyle, Events/Activities, Special Interests
Descriptions and facts in this press material relate to Volvo Cars' international car range. Described features might be optional. Vehicle specifications may vary from one country to another and may be altered without prior notification.
Related Images
Sep 10, 2004 ID: 2308 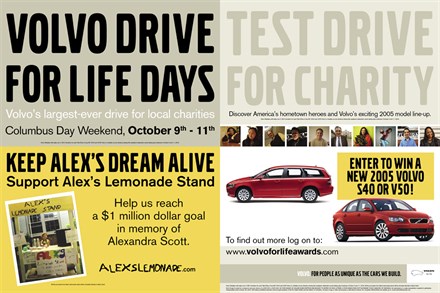 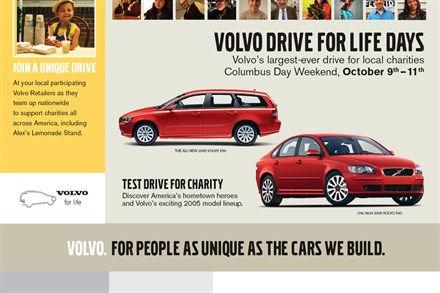