The new 2018 XC60 replaces Volvo’s highly successful original XC60, which in the nine years since its launch became the bestselling premium mid-sized SUV in Europe with nearly a million units sold globally. The XC60 today represents around 30 percent of Volvo’s total global sales.

“We have a strong heritage in designing stylish and dynamic SUVs that offer the latest in technology. The new XC60 is no exception. It’s the perfect car for an active lifestyle, and we have high hopes it will follow in the footsteps of the XC90 as a NACTOY winner,” said Anders Gustafsson, president and CEO, Volvo Car USA.

"The 2018 finalists reflect the incredible variety of vehicles and new, advanced technology automakers are adding to their offerings as well as the increasing emphasis on making the most advanced safety features available to consumers even on affordable models," said Mark Phelan, President of NACTOY.

Votes from nearly 60 jurors were tallied confidentially by Deloitte LLP and remained sealed until they were announced today by the organization's officers, including Vice President Matt DeLorenzo and Secretary-Treasurer Lauren Fix.

Chosen from dozens of new vehicles, jurors' evaluated the finalists based on segment leadership, innovation, design, safety, handling, driver satisfaction and value for the dollar. The process started in June 2017 by determining vehicle eligibility, and includes three rounds of voting.

Winners of the NACTOY award will be announced at the North American International Auto Show (NAIAS) in Detroit on January 15, 2018.

The XC60 is the first of the all-new 60 series cars and includes elements of the new Volvo design language. All XC60s will come equipped with a class-leading level of standard equipment including a panoramic moonroof, leather seats, Thor’s Hammer LED headlamps, and Apple Carplay / Android Auto integrated into the 9-inch center touch screen. Optional features such as soft Nappa Leather seats with ventilation and massage, Bowers & Wilkins Premium Sound and four-corner air suspension bring a new level of luxury to the mid-sized SUV market.

Pilot Assist, Volvo’s advanced semi-autonomous driver assistance system, which takes care of steering, acceleration and braking on well-marked roads up to 80 MPH, is also available in the new XC60 as an option.

Now in their 24th year, the NACTOY awards are unique because instead of being given by a single publication, website, radio or television station, they are selected by a jury of automotive journalists from the United States and Canada. Bridgestone Americas, Inc. is the presenting sponsor of NACTOY.

For more about NACTOY and its history, please visit http://northamericancaroftheyear.org/

Keywords:
2018, XC60, Product News
Descriptions and facts in this press material relate to Volvo Cars' international car range. Described features might be optional. Vehicle specifications may vary from one country to another and may be altered without prior notification.
To view the full copyright information click here
Related Images
Dec 01, 2017 ID: 217396 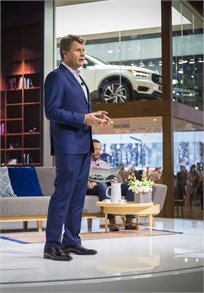