Since his appointment to Head of Americas region in 2015, Mr Kerssemakers has overseen a turnaround in the US with sales up by 46.8 per cent. Awareness of the Volvo brand has trebled under his stewardship and Volvo is now the fifth most searched for auto brand in the US.

“Lex brings over 30 years of experience to Volvo Cars’ largest sales region at a time when the auto industry is undergoing significant changes,” said Hakan Samuelsson, president and chief executive.

During his time as Senior Vice President he has overseen a sales growth of 13.5 per cent in Sweden and Western Europe, and achieved two consecutive years of record sales for the EMEA region.

“Anders inherits the Americas position at a crucial time. He brings three decades of experience in the auto industry along with the energy and drive needed to further develop Volvo’s ongoing turnaround in US,” said Mr Samuelsson.

Keywords:
People, Mission
Descriptions and facts in this press material relate to Volvo Cars' international car range. Described features might be optional. Vehicle specifications may vary from one country to another and may be altered without prior notification.
Media Contacts
Related Images
Aug 12, 2013 ID: 124411 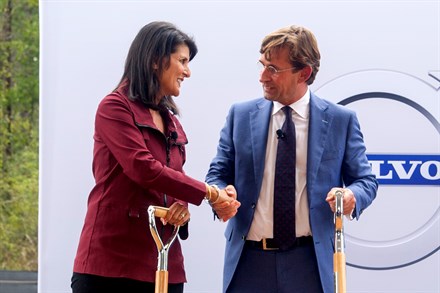