Volvo Cars, the premium car maker, Autoliv, the world leading automotive safety company, and NVIDIA, the AI and visual computing company, are teaming up to develop advanced systems and software for self-driving cars.

The three companies will work together with Zenuity, a newly-formed automotive software development joint venture equally owned by Volvo Cars and Autoliv, to develop next generation self-driving car technologies. Volvo Cars is committed to having Level 4 autonomous cars for sale by 2021.

As part of the collaboration Volvo Cars, Autoliv and Zenuity will use NVIDIA’s AI car computing platform as the foundation for their own advanced software development, bringing together two of the most respected companies in automotive safety with one of the world’s leading artificial intelligence companies.

“This cooperation with NVIDIA places Volvo Cars, Autoliv and Zenuity at the forefront of the fast moving market to develop next generation autonomous driving capabilities and will speed up the development of Volvo’s own commercially available autonomous drive cars,” said Hakan Samuelsson, president and chief executive of Volvo Cars.

Jensen Huang, chief executive of NVIDIA, said: “Artificial intelligence is the essential tool for solving the incredibly demanding challenge of autonomous driving. We are building on our earlier collaboration with Volvo Cars to create production ready vehicles that will make driving safer, lead to greener cities and reduce congestion on our roads.”

Volvo Cars, Autoliv, Zenuity and NVIDIA will work together to develop systems that can utilize deep learning -- a form of artificial intelligence -- to recognize objects in their environment, anticipate potential threats and navigate safely.

Zenuity was established April 18, 2017, and is a new ADAS and AD software company. Zenuity is a joint venture equally owned by Autoliv and Volvo Car Group. Headquarter is in Gothenburg, Sweden, but are also based in Detroit, US, and Munich, Germany. Zenuity has today 350 employees in total. More information at www.zenuity.com

About NVIDIA
NVIDIA's (NASDAQ: NVDA) invention of the GPU in 1999 sparked the growth of the PC gaming market, redefined modern computer graphics and revolutionized parallel computing. More recently, GPU deep learning ignited modern AI -- the next era of computing -- with the GPU acting as the brain of computers, robots and self-driving cars that can perceive and understand the world. More information at http://nvidianews.nvidia.com/.

About Autoliv
Autoliv, Inc. is the worldwide leader in automotive safety systems, and through its subsidiaries develops and manufactures automotive safety systems for all major automotive manufacturers in the world. Together with its joint ventures, Autoliv has more than 80 facilities with 70,000 employees in 27 countries. In addition, the Company has 22 technical centers in ten countries around the world, with 19 test tracks, more than any other automotive safety supplier. Sales in 2016 amounted to about US $10.1 billion. The Company's shares are listed on the New York Stock Exchange (NYSE: ALV) and its Swedish Depository Receipts on Nasdaq Stockholm (ALIV sdb). For more information about Autoliv, please visit www.autoliv.com.

Keywords:
Technology, Mission, Autonomous Drive
Descriptions and facts in this press material relate to Volvo Cars' international car range. Described features might be optional. Vehicle specifications may vary from one country to another and may be altered without prior notification.
To view the full copyright information click here
Related Images
Apr 06, 2016 ID: 189512 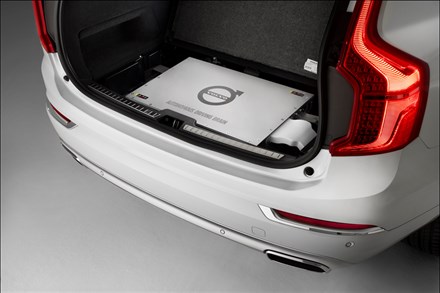