All new in 2003, the XC90 sees only minor changes for 2005. New flat blade windshield wipers more evenly distribute the blade's edge to the windscreen and hydrophilic surface treatments to the side mirrors and side glass help to wick rainwater off the glass. Also new is a standard tire pressure warning system (late availability), two new exterior colors: Titanium Gray Metallic and Magic Blue Metallic, and Rainsensor windshield wipers and Homelink are now standard.

The XC90 is the largest vehicle in the Volvo lineup. A full 93.2 cubic feet of cargo capacity and over 9.5 feet of cargo length are available when the second and third rows and the front passenger seat are folded flat. Optional forward facing third row seats, offered as part of the Versatility Package, increases seating capacity to seven. Also included are separate controls for the rear air conditioning unit and audio systems. A unique feature of the XC90's second row seats (when ordered with the Versatility Package) is that the 40/20/40 bench seat is adjustable fore and aft, affording more room for the third-row passengers. The third row also folds flat below the cargo floor, increasing luggage capacity without having to lift a heavy seat out of the vehicle. The center portion also incorporates a child booster seat, and when slid into the forward position allows the child to better interact with the front seat occupants.

As with other all-wheel-drive Volvos, the XC90's system operates seamlessly and is invisible to the driver. Under normal conditions, 95 percent of the engine's power is sent to the front wheels. If slippage is detected and the front wheels lose traction, a multi-plate clutch located in the rear differential engages and instantly begins routing up to a maximum of 65 percent of the power to the rear wheels.

With a wheelbase of 112.6 inches, 2.7 inches longer than the S80 luxury sedan, and an extremely wide track of 64.3 inches front and 63.9 inches rear, the XC90's ride is compliant and controlled even when driven over rough or uneven road surfaces.

Keywords:
XC90 (2002-2014), 2005
Descriptions and facts in this press material relate to Volvo Cars' international car range. Described features might be optional. Vehicle specifications may vary from one country to another and may be altered without prior notification.
Related Images
Sep 18, 2003 ID: 1361 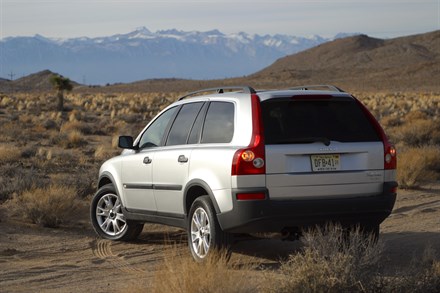 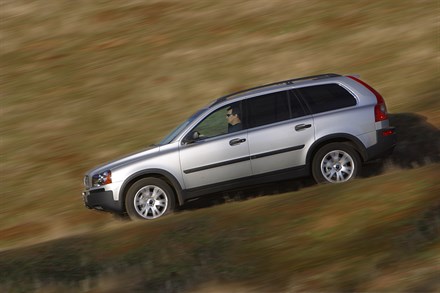