Los Angeles, CA, July 14, 2004 - Best Buddies International, a non-profit organization dedicated to enhancing the lives of people with intellectual disabilities by providing them with one-to-one friendship and integrated employment opportunities, and the First Lady of California and Honorary Chairperson Maria Shriver, will announce tomorrow the Volvo Hearst Castle Challenge (VHCC). Backed by Best Buddies key partner Volvo Cars of North America, the VHCC will be held Sunday, October 16, 2004. This premier 100-mile bike trek will proceed along the Pacific Coast Highway from Carmel to Hearst Castle, San Simeon, with companion 15-mile and 45-mile rides taking place along the same route.

Ms. Shriver and brother Anthony K. Shriver, founder of Best Buddies, will host a special event to announce the VHCC on Thursday, July 15, 10:30 am PT at Brentwood School East Campus, 100 South Barrington Place, Los Angeles. Immediately following the announcement, celebrity supporters will join the Shrivers in a Friendship Tandem Bike Race around the adjacent bike track as a kick-off for the October event. The Shrivers,

"I have been a longtime supporter of Best Buddies, and I am a big believer in the mission statement behind this program," said Maria Shriver. "I believe that we can all make a difference in other people's lives by giving of our time and ourselves; this is a great way to serve your state and to serve those with intellectual disabilities, while creating lasting friendships in the process."

As with our East Coast venue, the participation of celebrities riding on tandem bikes with people with intellectual disabilities makes for a truly unique experience. Friendship rides allow the community-at-large to directly appreciate the physical and intellectual capacities that buddies possess, while providing an exciting forum where anyone can take part.

Since its inception in 2000, the Volvo Hyannis Port Challenge has raised more than $5 million for Best Buddies programs worldwide. Volvo Cars of North America, the title sponsor for both the Hyannis Port and Hearst Castle Challenges, is sending riders in October. Vic Doolan, president and CEO, Volvo Cars of North America, said, "Best Buddies is a significant and positive force within local communities across the country. The Volvo Hearst Castle Challenge is certain to strengthen the presence of the organization within California and provide a wonderful venue for both buddies and volunteers. We are delighted to build upon our relationship with Best Buddies and participate in this important ride."

The 100-mile course along the California Coastline promises spectacular views and challenging terrain with 4,500 feet elevation gain. For the 15, 45 and 100-mile courses, people with intellectual disabilities will tandem-ride with celebrities and volunteers, or will ride independently alongside hundreds of cyclists.

Sponsors of the Volvo Hearst Castle Challenge include Volvo Cars of North America, Pepsi, Clear Channel, the San Francisco Chronicle, Pacific Gas & Electric, British Petroleum and the Ron Burkle Foundation. Each sponsor has provided funding and in-kind support to cover event expenses so as to ensure that 100 percent of funds raised by riders will directly benefit Best Buddies programs. Event details and online registration are available at www.volvohearstcastlechallenge.org and www.bestbuddies.org.

Members of the media interested in attending the press conference should contact Martha Blanchfield, public relations, via marthab@pacbell.net or 650-483-8816.

The VHCC benefits Best Buddies International, a non-profit organization founded in 1989 by Anthony K. Shriver, dedicated to enhancing the lives of people with intellectual disabilities by providing opportunities for one-to-one friendships and integrated employment. Best Buddies is a vibrant, international organization that has grown from one original chapter to more than 1,000 middle school, high school, and college campuses across the country and internationally. The organization is comprised of six programmatic divisions that positively impact more than 250,000 participants every year. Its programs today reach all 50 of the United States, and have active international programs in Australia, Canada, Colombia, Cuba, Egypt, Hong Kong, Ireland, Mexico, the Philippines and Sweden; with additional programs under development in Austria, Denmark, Iceland, Italy, Japan, Monaco, the Netherlands, New Zealand, Saudi Arabia, South Africa, Spain, Turkey and the United Kingdom.

Keywords:
Lifestyle, Events/Activities, Special Interests
Descriptions and facts in this press material relate to Volvo Cars' international car range. Described features might be optional. Vehicle specifications may vary from one country to another and may be altered without prior notification.
Related Images
Jul 15, 2004 ID: 2064 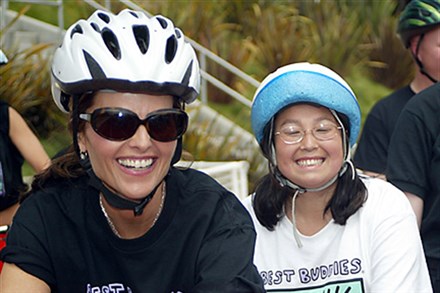