ROCKLEIGH, N.J.(July 28, 2009) ­­- Today, Volvo and Alex's Lemonade Stand Foundation for Childhood Cancer (ALSF) presented Chadi Salloum of Mahwah, N.J., with a brand new 2010 Volvo XC60 at Volvo's headquarters in Rockleigh. Salloum won the car by purchasing one of the 1,700 raffle tickets sold benefiting ALSF. More than $75,000 was raised through the raffle to benefit pediatric cancer research.

Liz and Jay Scott (Alex's parents) presented the keys to Salloum during the special ceremony.

"I'm thrilled to take home the Volvo XC60 today," Salloum said. "I want to thank Volvo and ALSF. Each time I drive it, I will remember why I have it and glad that, in a small way, I helped ALSF."

"Our mission, as a founding sponsor of ALSF, has been to bring awareness to the cause and raise money to help these kids," said Doug Speck, president and chief executive officer for Volvo Cars of North America. "With the Volvo XC60 raffle, we raised a lot of money for pediatric cancer research, and we feel good about that."

In 2008, Volvo launched the world's first virtual lemonade stand, http://www.lemonadestandforlife.com/, to support Alex's Lemonade Stand Foundation (ALSF), which raises funds to find better treatments and cures for all pediatric cancers. Volvo kicked off the grand opening by purchasing the first 200,000 cups. Since then, thousands of generous donors have joined the fight by purchasing virtual cups of lemonade.

Volvo owners can save money on their next service appointment when they purchase cups of lemonade at http://www.lemonadestandforlife.com/, June 12 through July 31, 2009, while at the same time helping to find a cure for pediatric cancer.

For every virtual cup purchased between June 12 through July 31, 2009, Volvo drivers will receive a discount for the same amount, up to $100, on their next service visit at any authorized U.S. Volvo retailer. Service discounts are redeemable June 12, 2009 through Dec. 31, 2009. For additional information, visit http://www.lemonadestandforlife.com/.

Alex's Lemonade Stand Foundation (ALSF) emerged from the front yard lemonade stand of cancer patient Alexandra "Alex" Scott (1996-2004). At the age of 4, Alex announced that she wanted to hold a lemonade stand to raise money to help find a cure for all children with cancer. Since Alex held that first stand, the Foundation bearing her name has evolved into a national fundraising movement, complete with thousands of volunteers across the country carrying on her legacy of hope. To date, Alex's Lemonade Stand Foundation, a registered 501(c)3 charity, has raised more than $25 million towards fulfilling Alex's dream of finding a cure, funding over 100 research projects nationally including those examining leukemia, brain tumors, neuroblastoma, Wilm's tumor, lymphoma, and osteosarcoma among others.

Keywords:
Special Interests, Sponsoring
Descriptions and facts in this press material relate to Volvo Cars' international car range. Described features might be optional. Vehicle specifications may vary from one country to another and may be altered without prior notification.
Related Images
Jul 30, 2009 ID: 20433 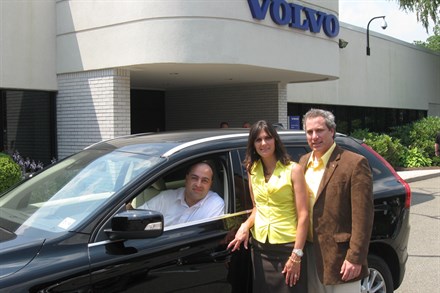