These days, everyone on board a car is protected by comprehensive safety systems. Everyone – except the unborn child. Researchers still know surprisingly little about fetuses in car accidents.

To shed more light on this area, Volvo Car Corporation has developed the world’s first official computer model of a pregnant crash dummy.

“Now we’ve covered the whole life-cycle,” says model developer Laura Thackray, CAE and Biomechanical Engineer at the Volvo Cars Safety Centre. “One big advantage is that both mother and baby can be scaled up or down to the size we want to study.”

This virtual crash dummy is a woman at a late stage of her pregnancy, since that is when the unborn baby is at greatest risk in an accident. The model was completed in 2002. “Since its completion, I've been running simulated front-end impact tests with it.”

The purpose of these is to study how the virtual mother-to-be and her unborn baby are affected by the seat belt and airbag in simulated accidents. The computer model makes it possible to study – in great detail – how the belt moves, the influence of belt and airbag on the uterus, placenta and fetus, and how the fetus moves in relation to the mother’s body, amongst other things.

The model can also be used to test new designs for seat belts and other safety systems.

“I’m certain that there’s room for further development of the three-point belt, to make it more comfortable and to provide optimized protection,” says Laura Thackray. Today many pregnant women wonder whether the seat belt could harm their unborn baby if they are involved in a car accident. Researchers all agree, however, in recommending that they should always wear their seat belt.

“Currently, it's the best line of protection for pregnant women and their babies. But it’s crucial to wear it in the right way. It should fit close to the body, be between the breasts and as low as possible over the hips. The lap section of the belt mustn’t be allowed to ride up in front of the tummy,” says Laura Thackray. “That could harm the baby.”

In an accident, the pregnant woman’s thorax and pelvis are both restrained by the belt, but her abdomen is free to move in the direction determined by the particular forces arising from the impact. Because the fetus is floating free inside her, injuries tend to fall into two main types. The more common of the two is that the placenta becomes either partially or completely detached, which means that the baby cannot get enough oxygen. The rarer scenario is for the baby to sustain physical injury due to impacts with the mother's pelvic bones or car interior.

“We think that the placenta may become detached because, while the uterus is relatively elastic and can therefore change shape, the placenta is not equally resilient under acceleration,” Laura Thackray explains. “We think so, but we don’t know yet. That’s why this model is so important. We have to find out more to be able to protect the fetus in the best possible way.”

The virtual dummy, Linda, is a cross-section animation. The model is based on a woman in the final stage of pregnancy, and represents the body size of an average-sized American or European woman.

Keywords:
Safety, Quality, Technology
Descriptions and facts in this press material relate to Volvo Cars' international car range. Described features might be optional. Vehicle specifications may vary from one country to another and may be altered without prior notification.
Related Images
Jun 08, 2004 ID: 2028 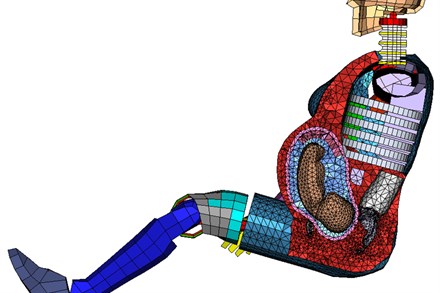 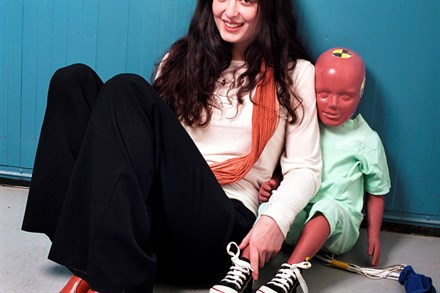