To support this drive towards a global standard for electric car charging, Volvo Cars has decided to throw its weight behind the Charging Interface Initiative, a consortium of stakeholders that was founded to establish their Combined Charging System (CCS) as the standard for charging battery-powered vehicles.

Volvo Cars is one of the leading makers of plug-in hybrid cars and will offer a plug-in hybrid variant on every new model as it replaces its entire product portfolio in the coming years. It will introduce a fully electric vehicle by 2019, based on its modular SPA vehicle architecture.

In order to cement the increasing popularity of electric vehicles and ensure that customers fully embrace the technology, Dr Mertens argues that a simple, standardised, fast and global charging infrastructure is needed.

“We see that a shift towards fully electric cars is already underway, as battery technology improves, costs fall and charging infrastructure is put in place,” said Dr. Mertens. “But while we are ready from a technology perspective, the charging infrastructure is not quite there yet. To really make range anxiety a thing of the past, a globally standardised charging system is sorely needed.”

The Combined Charging System, which will offer both regular and fast charging capabilities, makes electric car ownership increasingly practical and convenient – especially in urban environments which are ideal for electric vehicles.

It combines single-phase with rapid three-phase charging, using alternating current at a maximum of 43 kilowatts (kW), as well as direct-current charging at a maximum of 200 kW and the future possibility of up to 350 kW – all in a single system.

The Charging Interface Initiative is currently in the process of drawing up requirements for the evolution of charging-related standards and certification for use by car makers around the globe.

“We are very happy to support and be involved in the setting of standards for electric vehicle charging systems. The lack of such a standard is one of the main obstacles for growing electric vehicles’ share of the market,” said Dr. Mertens.

Volvo Cars, which has a rich heritage of research and development in electric vehicles stretching back over 40 years, is one of the leading car makers in the field of plug-in hybrids with its Twin Engine technology. Already now, one in five of all Volvo XC90s sold is a T8 Twin Engine plug-in hybrid.

“Our Twin Engine technology offers the low emissions, silence, convenience and performance of a pure electric car, combined with the range of a conventional powertrain. It offers the benefits of electrification already today,” added Dr. Mertens.

Keywords:
Environment, Technology, Mission, Sustainability
Descriptions and facts in this press material relate to Volvo Cars' international car range. Described features might be optional. Vehicle specifications may vary from one country to another and may be altered without prior notification.
To view the full copyright information click here
Related Images
Dec 02, 2015 ID: 170158 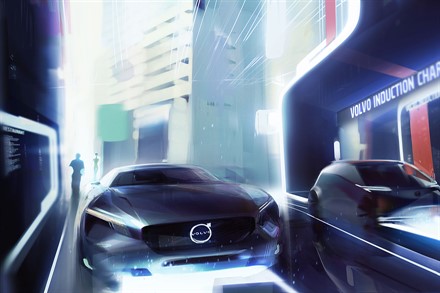