A NEW VOLVO EVERY THREE YEARS FOR LIFE

BILLINGS, Mont. (Oct. 8, 2003) - Robert Young, 42, of Bozeman, Mont., walked into Underriner Motors yesterday and drove out with a free Volvo car. Every three years for the rest of his life, he'll do the exact same thing.

Introduced in December 2002 by Volvo Cars of North America, the Volvo for Life Awards asks people to nominate a local hero they know at www.volvoforlifeawards.com. In its first year, more than 2,000 hero nominations were submitted. At a New York awards ceremony in April - judges Aaron, Newman, Kennedy, Bill Bradley, Jane Goodall, Maya Lin, Sally Ride and Eunice Kennedy Shriver - named Young the top hero. Volvo provided him $60,000 in grants and a Volvo every three years for the rest of his life.

"Robert's efforts toward bringing hope and housing to American Indians is truly extraordinary," said Vic Doolan, president and chief executive officer for Volvo Cars of North America. "His work personifies the conscience, care and character the Volvo for Life Awards celebrates. We congratulate him on this recognition."

"It's incredible to be honored by Volvo with such an award," Young added. "This program can have a lifelong impact on people, and I'm delighted that my involvement with the Volvo for Life Awards will continue."

Nominations for the second annual Volvo for Life Awards are now being accepted through Jan. 16, 2004, at www.volvoforlifeawards.com. Young will join Aaron, Bradley, Kennedy, Lin, Newman, Ride and Shriver to select the next program winner, who will be chosen in April 2004 and also presented with a Volvo car for life. For more information, visit www.volvoforlifeawards.com. A Spanish version of this site can also be accessed at this address.

Many more live together - in groups of up to 20 people in some cases - in dilapidated shacks and uninsulated trailers. And, every winter, native elders freeze to death in their homes. Young and his volunteers teach reservation residents how to build homes out of a sustainable, abundant resource: straw bales.

Young has partnered with the University of Washington and Penn State University to design a straw bale model that is three times more energy-efficient than a typical home. With Young's help, some families save enough in monthly heating costs alone to pay the majority of a home mortgage. More importantly, they are finding a lasting solution to a problem that has plagued their communities for decades.

Young is a native of Seattle, where he founded Red Feather Development Group. He moved his offices to Bozeman in May 2003.

Keywords:
Events/Activities, Special Interests
Descriptions and facts in this press material relate to Volvo Cars' international car range. Described features might be optional. Vehicle specifications may vary from one country to another and may be altered without prior notification.
Related Images
Oct 08, 2003 ID: 1732 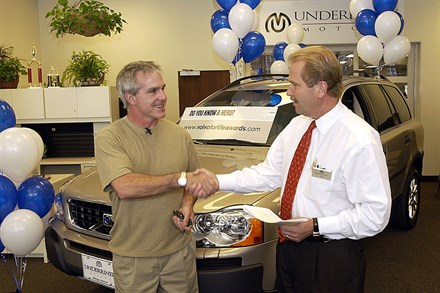