Fifty-three automotive journalists from the United States and Canada voted for the luxury SUV for being a benchmark in its segment, based on factors including innovation, comfort, design, safety, handling, driver satisfaction and value for the dollar.

It is the second time the XC90 has won the North American Truck of the Year award. The first was in 2003, when the vehicle was originally introduced.

“The XC90 is a past winner of our award,” said Tony Swan, a 23-year member of the North American Car and Truck of the Year Jury. “That vehicle was obviously outstanding, but the new XC90’s blend of advanced technology, performance and craftsmanship stands out even more, against much more sophisticated competition.”

The Volvo XC90 features all new platform, powertrain and semi-autonomous driving technologies that set a new standard for the luxury SUV segment. It is available in five or seven-passenger, front or all-wheel-drive configurations with powerful and efficient 250- or 316-horsepower turbocharged and dual-charged engines that can deliver up to an EPA rated 25 MPG. The XC90 is also be available with a 400-horsepower, 53 MPGe hybrid electric powertrain, making it the world’s first seven passenger Plug-in Hybrid Electric Vehicle (PHEV).

All XC90s feature Volvo’s award-winning Sensus infotainment system, which centers on an intuitive, tablet-like touch screen that puts all of the vehicle’s systems and functions at the driver’s fingertips. Volvo City Safety, which includes Pedestrian Detection with Automatic Emergency Braking, automatically applies the brakes should a collision be imminent, is also standard. The available Pilot Assist semi-autonomous driving system will control vehicle speed and direction at speeds up to 30 MPH. Prices start at $43,900.

About the North American Car and Truck of the Year awards

The North American Car and Truck of the Year awards – now in their 23rd year – are unique in the United States because instead of being given by a single media outlet they are awarded by an independent group of automotive journalists from the United States and Canada who represent magazines, television, radio, newspapers and web sites.

Keywords:
Awards, XC90, 2016
Descriptions and facts in this press material relate to Volvo Cars' international car range. Described features might be optional. Vehicle specifications may vary from one country to another and may be altered without prior notification.
To view the full copyright information click here
Related Images
May 29, 2015 ID: 163255 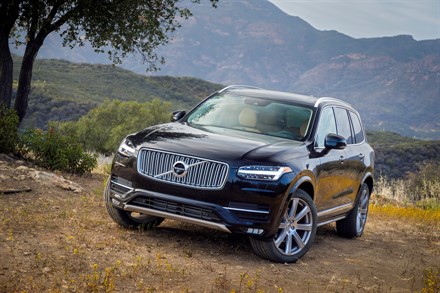