Detroit, MI (November 8, 2016) – The all-new Volvo XC90 is one of three finalists for the 2016 North American Truck/Utility of the Year. The announcement is a result of 53 independent journalists in the U.S. and Canada who recognize the seven-passenger SUV among vehicles setting new automotive benchmarks.

The 2016 Volvo XC90 is ushering in the company’s new product strategy, which encompasses all-new design, power and architecture philosophies. The XC90 also introduces Volvo’s Sensus Connect, a  tablet-like touchscreen that eliminates most interior buttons; two more world-first safety functions with Intersection Auto Brake and Run Off Road Protection; and Pilot Assist, Volvo’s semi-autonomous technology that enables the car to accelerate, decelerate, stop and steer itself at speeds below 30 MPH.

“The all-new XC90 represents the future of Volvo,” said Lex Kerssemakers, president and CEO, Volvo Cars of North America. “We are grateful that NACTOY judges recognize how significant it is for consumers, the industry, and for us.”

Sales of the all-new XC90 have been strong since they began arriving in showrooms this past summer. Globally, demand for the XC90 has exceeded projections by more than 50 percent, with a majority of consumers opting for the uprated Inscription trim level. Overall U.S. sales for Volvo Cars is up 18% so far in 2015 compared to last year.

The North American Car and Truck of the Year awards – now in their 23rd year – are unique in the United States because instead of being given by a single media outlet they are awarded by an independent group of automotive journalists from the United States and Canada who represent magazines, television, radio, newspapers and web sites.The awards are designed to recognize the most outstanding new vehicles of the year. These vehicles are benchmarks in their segments based on factors including innovation, comfort, design, safety, handling, driver satisfaction and value for the dollar.

Keywords:
XC90, 2016, Product News
Descriptions and facts in this press material relate to Volvo Cars' international car range. Described features might be optional. Vehicle specifications may vary from one country to another and may be altered without prior notification.
To view the full copyright information click here
Media Contacts
Related Images
May 29, 2015 ID: 163247 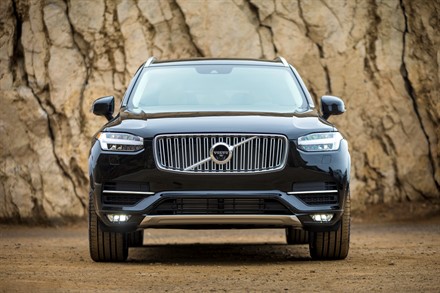