Garcetti was accompanied by Lex Kerssemakers, president and CEO of Volvo Cars of North America, after the two participated in a press conference at the CalTrans building in downtown Los Angeles that highlighted policies and technologies to make the city’s roads safer for pedestrians and vehicle occupants.

Garcetti and Kerssemakers drove the new XC90 equipped with Volvo’s Adaptive Cruise Control with Pilot Assist, which enables safe and comfortable semi-autonomous driving by automatically following the vehicle ahead in stop-and-go traffic. Acceleration, braking and now also steering are controlled automatically at speeds up to 30 mph. Available in all 2016 XC90 models Adaptive Cruise Control with Pilot Assist is a welcome relief from the gridlock that has become a way of life for Los Angeles commuters.

“The Pilot Assist system in the all-new XC90 is just another step toward our vision of a day when drivers will be able to choose between driving themselves on a spirited run along Mulholland Drive, and safely delegating the driving to the car in rush-hour traffic,” said Kerssemakers. “We will be revealing more about that at the Los Angeles Auto Show tomorrow.”

Volvo Cars’ Vision 2020 states that by 2020 no one should be killed or seriously injured in a new Volvo car. This continuously inspires Volvo to innovate around safety and create systems like City Safety, a suite of technologies that helps drivers avoid accidents by continuously monitoring the space around the car for other vehicles, objects, pedestrians and cyclists. If a collision is imminent, City Safety will sound an alert and apply the brakes to avoid or mitigate an impact.

“Volvo is, and always will be, about safety. Our Vision 2020, announced in 2007, underpins that,” said Kerssemakers. “We encourage and embrace initiatives like the city’s pedestrian-focused Vision Zero in reducing driving-related accidents and injuries in Los Angeles.”

Volvo introduced City Safety in 2008 and in 2014 made it standard on all its new cars. Today there are more than one million Volvos equipped with City Safety. One of the most comprehensive scientific studies performed on collision avoidance systems in cars reveals that Volvo Cars’ standard City Safety technology reduces insurance claims for rear-end frontal collisions by 28 percent.  The continuously enhanced collision-avoidance and mitigation technologies, which are standard in the XC90, include yet another Volvo world first: automatic braking if the driver turns in front of an oncoming vehicle.

Keywords:
Product News
Descriptions and facts in this press material relate to Volvo Cars' international car range. Described features might be optional. Vehicle specifications may vary from one country to another and may be altered without prior notification.
To view the full copyright information click here
Media Contacts
Related Images
Nov 17, 2015 ID: 169523 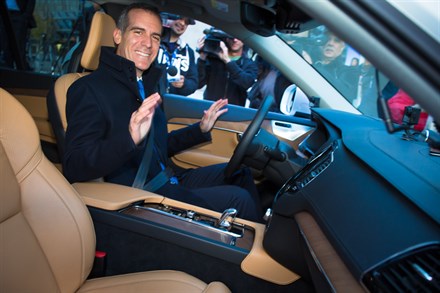 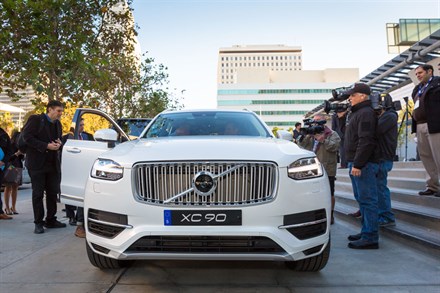